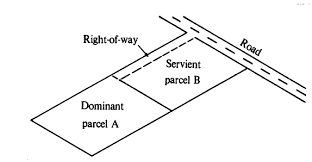 A revision is filed against an order passed by the Sub Divisional Officer Akola rejecting the revision and confirming the order passed by the Nayab Tahsildar, Akola granting the injunction in favor of Respondent. A single-judge bench comprising of Justice  N.B. Suryawanshi adjudicating the matter of Mahadeo S/o Issnaji Bhad and Ors. ..Vrs. Laxman S/o Namdeo Tale and Ors( CRA no. 31 of 2020) dealt with the issue of whether to allow the present revision petition.

The Non-applicants filed the proceedings u/s-5 of the Mamlatdars’ Courts Act 1906 against the Applicants claiming a  right of way from the boundary. It was claimed that earlier the Non-Applicants applied the Tahsildar seeking a right of way in the year 2017. However, the Applicants settled the matter out of the Court. Thereafter, Applicants, Nos.1 and 2 agreed that since both their agricultural lands were abutting to the main road, the right of way from the boundary was orally granted by them to the  Non- Applicants. But thereafter they refused to allow the Non-applicants to continue the use of that way.

After hearing both the parties, the Nayab Tahsildar allowed the prayer of the Non-Applicants and permitted them a right of way from the boundary. The revision filed by the Applicants challenging the said order was dismissed on merits, hence the present Civil Revision Application.

The applicants submitted that the existence of the way granted by the Nayab Tahsildar is not there in the village map. Hence, both the impugned orders are unsustainable. They relied on the Spot inspection report and submitted the road from the boundary was no found in the village map. Both the authorities have ignored this aspect while granting the right of way to the Non-Applicants, and therefore, the impugned orders are unsustainable and the same are liable to be quashed and set aside.

The Non-applicant submitted as per sec-5 that it does not require that to claim a right of way, the road has to be reflected in the village map. The adjoining agricultural landowners have supported the case of the Non-Applicants. The vendor of the Non-Applicants has also supported the case of the Non- Applicants, therefore, the Nayab Tahsildar was justified in granting the way to the Non- Applicants from the boundary. It was also submitted that there was no merit in the civil revision application; hence, it must be dismissed.

The Respondents had supported both the orders contending that no case is made out to interfere in the concurrent findings of the facts recorded by the authorities below. It was stated that there was no dispute that the village map did not show the way. However, the existence of the way in a village map is not sine qua non for exercising the jurisdiction under Section 5 of the said Act. The Spot Inspection Report reveals that the road on the Boundary was closed.

The Nayab Tahsildar has considered the evidence led before him and has also taken into consideration the decision of the District Court supporting the case of the Non-applicant. The Nayab Tahsildar has further noted that from the evidence brought on record, it is clear that the Non-Applicants have no other way to approach their agricultural land and the Applicants have dug a trench on the boundary.

The court observed that according to the records and looking into the Spot inspection report that that the right of way claimed by non-applicants was being used by their forefathers which was also confirmed but the neighbors. Hence looking into this contention he the Nayab Tehsildar was justified in allowing injunction and hence granting the right of way.