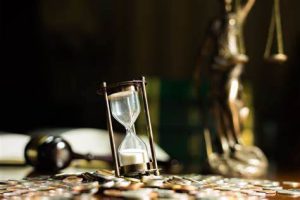 Abstract: As cliched as it may sound but the truth is justice delayed is justice denied. It implies that if justice is not being served in due time, even if it is given later, it is not justice as there will be an injustice for a considerable period. When we delay an action it not only weakens the desired result of it but also such delays defeat the very purpose for which we perform those actions. In our country judicial delay is one of the major issues which can be seen in the number of backlogged cases in our courts. This is shaking the very foundation of justice which is namely public confidence. Such a feudal system of rule of law will decrease the overall concept of justice in India.

The preamble of the Indian constitution has placed justice- social, economic and political on the highest pedestal above all other basic structures. Delay of justice is not the simple postponement of an action over some time but in its judicial meaning, it is an action in a process that has irreversible long-term consequences. This process with the progress of time slowly stealthily and silently kills justice.

When we look into the facts as of 15 September 2021, there were around 4.5 crore pending cases across all courts in India, especially in the district and subordinate courts. In 2019, there were 3.3 crore pending cases this shows that in the last two years, India has added 23 cases every minute to its pendency. The total number of pending cases in the Supreme court of India is 71411 as of 2nd august, 2022 out of which 56365 are civil matters and 15,076 are criminal matters. This issue is raising serious problems. The question is how are we going to cope with the ever-increasing backlog in our judicial system and deliver timely justice to an ordinary man?

The evolution of the right to speedy justice, its jurisprudence and its growth as a fundamental human right originates from the mother of all constitutions which is the British constitution the famous Magna Carta of 1215. Section 40 of this great charter reads:

The last four words of the statement hold huge political importance in the evolution of human rights.

Historically, the 6th amendment to the constitution of the oldest democracy, the United States of America also provides that “in all criminal prosecutions, the accused shall enjoy the right to a speedy and public hearing”.

The right to a hearing within a reasonable time is also recognised in the universal declaration of human rights of 1948 and it is also guaranteed in the charter of Fundamental rights on human rights in the Canadian rights and freedom.

Hence due to all these efforts the right to justice within the stipulated time is being accepted as a universal human right and so occupies the centre stage of national and judicial goals of all civilized democracy.

It is difficult to make a discretion as to where the delay begins in the justice delivery system or when the number of delayed cases becomes a backlog in the given jurisdiction and time frame. To get the solution, we need to find the roots of the problem. Some of the major issues that lead to the inefficiency of the judiciary are as follows-

This is a case in which the three-judge bench of the supreme court in the postscript of the judgement has made some intriguing and riveting observations while drawing a context between judicial delay, the pendency of cases and the restriction of the period for oral submissions by counsels. The bench has emphasized how the proceedings will go on post covid situations.

Facts of the case- the bench was hearing a petition wherein the social media intermediary, Facebook has been alleged of fuelling violence which led to communal riots in different parts of North-east Delhi. The hearings of the case went on for 26 long hours. While deliberating on the Postscript, the apex court clarified that the same was only to start a discussion among the legal fraternity and to notice the importance of succinctly framed written synopsis in advance, and the same being adhered to and to make judgments more crisp, clear and precise so that the common man can understand what is the law being laid down.

Judgement opinion- Although the majority of nations do not set a time limit for oral arguments, the significance of such limitations in a nation like India with a sizable number of open cases cannot be ignored. To make sure that the complexity of judgements does not beyond the comprehension of an “ordinary man,” it is crucial to analyse the suggestions made by the Court. However, the legal community and the general public may have opposing views on the matter.

To address the case backlog, Lok Adalats were established around the nation. Lok Adalats encourage parties to resolve disputes out of the purview of the courts. These courts have resolved millions of disputes over the previous 20 years.

Constitutionality- Lok Adalat were allowed by the 42nd amendment. Article 39-A was introduced to ensure that justice is not denied to any citizen of the country due to reasons of economic or other disabilities. Articles 14 and 22(1) also make it obligatory for the state to ensure equality before the law and a legal system which promotes justice based on equal opportunity for all.

Instead of building new organisations to address the same issues, it’s crucial to think about how these current systems may be improved. The introduction of Lok Adalats opened a new chapter in India’s legal system. Long-running cases in India are resolved outside of court at the Lok Adalat. Lok Adalats use negotiation and compromise to resolve conflicts. By 2015, there were more than 15 lakh public courts in the country, out of which, more than 8 crore lawsuits were settled. Most state governments have encouraged the Lok Adalats, as they reduce the burden on the judiciary.

We might infer from the discussion above that statistics on the protracted backlog of court cases that have been pending for the “last six decades” is another indictment of the nation’s struggling legal system, which is eroding public confidence. The multifaceted reforms are a long-term undertaking, and any significant modifications to judges’ line of work must first be approved by them. To remedy this sentence and trust deficiency, fast-track courts specialising in sexual offence cases were established around the nation. However, swift justice has its own problems.

Certainly “justice delayed is justice denied” but the opposite, that “swift justice is injustice,” is also true.