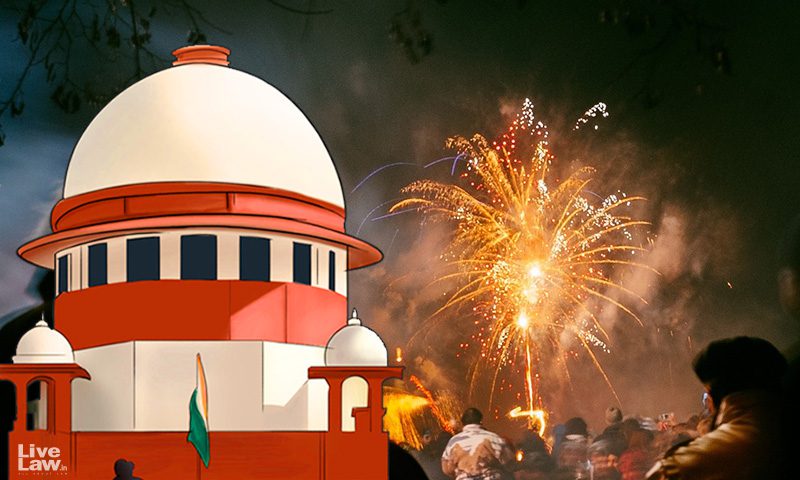 Since time immemorial Hindus have continuously followed it and it is also entitled to be protected as a core and essential religious practice under Article 25 of the constitution as a fundamental right. On the other hand, the protection of the environment is not only a duty of the state but the citizens and therefore, the use of firecrackers violate various provisions in the Constitution like the right to live in a noise-free and clean environment that is protected under Article 21 of the Constitution.

STATES WHICH HAVE BANNED FIRECRACKERS:

DELHI: The Delhi government had already passed an order banning the shortage, sale, and use of all types of firecrackers in the national capital till January 1, 2023.

PUNJAB: The Punjab Government had given a window of 2 hours from 8 to 10 pm which will be open for bursting crackers on Diwali.

HARYANA: The Haryana State Pollution Control Board (HSPCB) had prohibited the manufacturing, sale and use of all kinds of firecrackers, excluding green crackers, immediately.

WEST BENGAL: The West Bengal government had allowed only green fireworks during the Kali Puja on October 24.

FOLLOWING ARE THE CASELAWS WHICH ENABLE US TO UNDERSTAND THE INTERPLAY IN A BETTER WAY:

In the case of Gautam Roy vs. State of West Bengal Special Leave Petition No. 26640/2021, the Calcutta High Court noted the spike in pollution in the State of West Bengal after festivals like Diwali, Durga Pooja etc. In the light of the same, The High Court in an order passed on 5th November 2020 issued a state-wide ban on the manufacture, sale and bursting of firecrackers. One of the grounds taken into consideration by the High Court while issuing this ban was the COVID-19 pandemic situation in the state. Several people were admitted to the hospitals already and a sudden spike in air pollution would have resulted in worsening of their health conditions. Also, the restrictions on public gatherings in the state were also taken into consideration. The order was passed keeping in mind the duty of the judiciary and the state to protect and ensure the safety of the lives of human beings in the state.

The Calcutta High Court in October 2021 ordered a complete ban on the sale and use of firecrackers in the State of West Bengal. This order was challenged before the Supreme Court and was set aside by the Supreme Court.

The court herein held that there cannot be a blanket ban on firecrackers and only those firecrackers are banned that are harmful to the environment and to the health of the citizens, especially elderly citizens and children. The Supreme Court further directed the pollution control authorities to keep a check on the sale of firecrackers and to ensure that no chemical firecrackers are being sold under the guise of green firecrackers. It also noted that the right to health of the citizens cannot be infringed on account of the celebration of festivals. However, the Supreme Court upheld the order of the High Court partly where the High Court had placed a ban on the import of firecrackers.

TRIBUNAL ON ITS OWN MOTION vs. MINISTRY OF ENVIRONMENT, FORESTRY AND CLIMATE CHANGE: DECEMBER 2020

The National Green Tribunal initiated suo-moto proceedings to analyze the impact of the issue of the use of firecrackers on the environment and issued detailed guidelines to prohibit the same. The court noted that due to the COVID-19 pandemic in the country, the risk to lives of human beings in the country was already very high. If this was to be coupled with the increase in pollution that is caused by extensive bursting of firecrackers, then the adverse effects that will be caused to the patients at risk will be doubled. The NGT noted that it was in the interests of the public at large that precautionary steps be taken to prevent such immediate spikes in air pollution. The NGT issued the following directions:

ARJUN GOPAL vs. UNION OF INDIA

In the case of Arjun Gopal vs. Union of India, Writ Petition No. 728/2015 the Supreme Court passed a judgement on 23-10-2018. In this particular case, petitions were filed by 6 month and 14 months babies through their fathers who felt due to degradation of air quality and pollution, petitioners may come across various health hazards. Prayer also included banning use, in any form of firecrackers and minor explosives, in any form. The court held that the pollution caused by firecrackers violates Article 48A and Article 51A, which gives citizens the right to a healthy environment. These articles come under the ambit of Article 21 right to life and cannot be violated. The court decided that the country’s environmental law’s precautionary principle did not necessitate thorough analyses.

The precautionary principle has been established as a part of customary international law. About the precautionary principle, it was held in the Vellore Citizens Welfare Forum a case that the State Government and other statutory authorities must anticipate, prevent, and attack the causes of environmental degradation. The court also relied on the Vellore Citizens’ Welfare Forum Case concerning Article 19(1)(g) and stated that environmental protection is a component of Article 21 and that it must take precedence over the freedom to conduct business entrenched in Article 19(1)(g). It also held that Article 25 is subject to Article 21 and that if a religious practice endangers people’s health or lives, it cannot be protected by Article 25.

Given the facts demonstrating the negative effects of burning crackers on humans, cracker production should be prohibited entirely. Even though a ban on manufacture puts thousands of people’s livelihoods in jeopardy, the fundamental health threat created by the creation and burning of firecrackers impacts millions of lives in some way. A complete ban on firecrackers that was advocated by the Supreme Court initially has not been continued in recent times, Instead, the Supreme Court has tried to create a balance between the right to life of the citizens and the right to carry out the trade of selling firecrackers. In the light of the same, it has allowed the manufacture and sale of green firecrackers and has restricted the time periods in which firecrackers have to be burst. While the government must work together and make significant efforts to address this problem, we must also do our part to help the environment. It is critical not only to follow the Constitution’s fundamental duty to have compassion for our surroundings, but also to respect the moral responsibility that is vested in us to safeguard mother nature and make it a better place to live in.