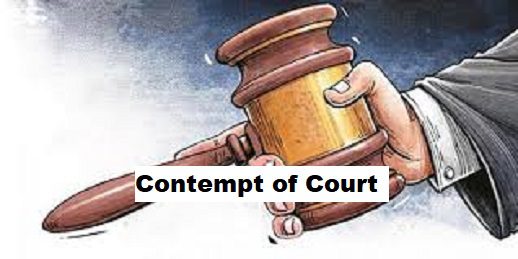 Law in India has evolved from various customary practices and religious prescription to the present constitutional and legal system of our society. Law has its sources in the Vedas, the Upanishads and other religious scripts.

RULE BY LAW, NOT MAN

Indian Constitution is based on the theory of “RULE OF LAW” which has been adopted by India and given to itself, Rule of Law says that a society must be ruled by law and not men, “Be you ever so high, law is above you”. Our law says that no one is above law.

The question that now arises is that, what about those who disrespect their law?

What is contempt of courts

An acts or omission calculated to interfere with the due administration of justice. Contempt of court is the disobedience of the court by acting in opposition to authority, the justice and dignity thereof.

Contempt of court is being impolite to legal authorities in the courtroom or rebelliously failing to follow a court order which may result to contempt of court procedures.

Definition as given by Attorney General v. Times newspaper ltd.

“The term contempt of court is a generic term descriptive of conduct in relation to particular proceeding in a court if law which tends to undermine that system or inhibit citizens from availing themselves of it for the settlement of disputes.

History of law of contempt of court in India.

This concept has been adopted from English law and statutes.

According to philosopher Kautilya, in Arthashastra when a judge threatens, bully or make silence to any of the dispute in the court room the same shall be punished.

1st statutory provision for contempt of courts was established in The Contempt of Courts Act, 1952 by repealing act of 1926 prevailing in states of Rajasthan and Sauras.

A bill was introduced in the Lok Sabha by Shri B.B. Das Gupta on 1st April, 1960 to make laws relating to contempt of courts more strict. A special committee was made under the chairmanship of H.N. Sanyal that gave birth to Contempt of Courts Act, 1971.

The statutory procedure for contempt of courts is outlined in the Contempt of Court, Act, 1971.

MEANING OF CONTEMPT OF COURTS: Section 2 of the Act is the INTERPRETAION CLAUSE. That defines Contempt of Court.

Section 2(a) says that Contempt of Court means Civil Contempt or Criminal Contempt. It means there is no any straight jacket formula has been mentioned in this definition. The definition is of the inclusive nature.

Contempt of courts is the offence of being disobedient to or disrespectful toward a court of law and its officers in the form of behaviour that opposes or defies the authority, justice and dignity of the court.

Contempt of court can be classified into two broad segments of-

Types of contempt of courts

There are two types of contempt of courts- Civil and Criminal

The bare act definition of them are-

“Civil contempt” means wilful disobedience to any judgment, decree, direction, order, writ or other process of a court or wilful breach of an undertaking given to a court.

“Criminal contempt” means the publication (whether by words, spoken or written, or by signs, or by visible representation, or otherwise) of any matter or the doing of any other act whatsoever which—

(ii) prejudices, or interferes or tends to interfere with, the due course of any judicial proceeding; or

(iii) interferes or tends to interfere with, or obstructs or tends to obstruct, the administration of justice in any other manner

It says that a Contempt of Court may be punished with simple imprisonment for a term which may extend to SIX MONTHS or with fine which may extend to TWO THOUSAND RUPEES, or with BOTH. However, the proviso is as an exception clause of the penal provision that says that the accused may be discharged or the punishment awarded may be REMITTED on apology being made to the satisfaction of the Court. The explanation of the proviso says that an apology shall not be rejected merely on the ground that it is qualified or conditional if the accused makes it bona fide. However, there is no any distinction between Civil Contempt or Criminal Contempt regarding the penal provision. It means Section 12 applies in both the Contempt.

Remedies against an order of punishment

(a) no court shall impose a sentence under this Act for a contempt of court unless it is satisfied that the contempt is of such a nature that it substantially interferes, or tends substantially to interfere with the due course of justice

(b) the court may permit, in any proceeding for contempt of court, justification by truth as a valid defence if it is satisfied that it is in public interest and the request for invoking the said defence is bona fide.

INDIAN JUDICIARY ON CONTEMPT OF COURTS:

The Supreme Court of India is having original and appellate jurisdiction

regarding such cases, so there are many occasions, our Supreme Court of India

has thrown the lights on this subject. Some cases are as such

As the Chief Minister could not protect thereligious property, it was treated as the breach of the undertaking given by the court and was considered as a CIVIL CONTEMPT OF COURT. It reflects that the doctrine of RULE OF LAW prevails in India.

The most reputed Justice of Indian Judiciary, in many occasions, made serious allegations against other reputed Justices of Indian Judiciary and that was the reason behind the filing of the case. As per Para 35 of the case, the allegations were found to be defamatory and as per Para 36 it was treated as the CONTEMPT OF THE COURT. It suggests that RULE OF LAW prevails in India.

The Supreme court held that the judges can use contempt jurisdiction for upholding their own dignity.

Criticism against contempt of court

This topic has gained severe criticism by judges and lawyers that this has a negative effect on freedom of speech and expression.

In 2011, Retd. SC Judge, Markendeya Katju called for amendments to allow media to report better on law and judiciary matters.

In 2018, The law commission of India was tasked by the government to re-examine s.2 of the act and suggested that contempt of court should only be limited to cases of civil contempt.