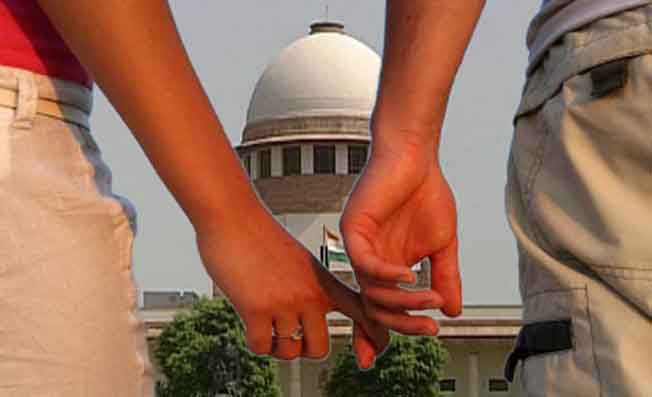 Law is a set of guidelines and orders accepted by society and follow the same. Law brings justice to the society, without which there would be situation of chaos and conflicts which can become uncontrollable.

However, the right to maintenance in a live-in relationship is decided by the court by the Domestic Violence Act and the individual facts of the case.

The Apex Court in so many of its judgments has stated that if a man and a woman “lived like husband and wife” in a long-term relationship and even had children, the judiciary would presume that the two were married and same laws would be applicable.

The Right of maintenance is available under Section125 of the Criminal Procedure Code to wife irrespective of the religion, but since no religion accepts the concept of live-in, this remains a question whether live-in partners have a right of maintenance under Indian law or not?

The Hon’ble Supreme Court in the case of Captain Ramesh Kaushal vs. Veena Kaushal, the  held that section 125 is a re-incarnation of section 488 of CrPC, 1898.

The word ‘wife’ has been defined in Explanation (b) to section 125(1) of CrPC as “Wife includes a woman who has been divorced by, or has obtained a divorce from, her husband and has not remarried.”

A three-judge bench of the Supreme Court widened the scope of provision under s.125 of Cr.P.C in the case of vimala v. veeraswamy, Section 125 of the Code of Criminal Procedure is meant to achieve a social purpose. The objective of the act is to prevent vagrancy and destitution. It provides a speedy remedy to a deserted wife’s access to basic livelihood food, clothing and shelter. When an attempt is made by the husband to negative the claim of the neglected wife depicting her as a kept-mistress on the specious plea that he was already married, the court would insist on strict proof of the earlier marriage. The woman not having the legal status of a wife is thus brought within the inclusive definition of the term ‘wife’ consistent with the objective.

The court held that validity of the marriage for the purpose of summary proceeding under Section 125 Cr.P.C. is to be determined on the basis of the evidence brought on record by the parties. The standard of proof of marriage in such proceeding is not as strict as is required in a trial of offence under section 494 of the Indian Penal Code.

If the claimant in proceedings under Section 125 of the Code succeeds in showing that she and the respondent have lived together as husband and wife, the Court can presume that they are legally wedded spouses, and in such a situation, the party who denies the marital status can rebut the presumption. If Magistrate is prima facie satisfied with regard to the performance of marriage in proceedings under Section 125 Cr.P.C., strict proof of performance of essential rites is not required.

It is to be remembered that the order passed in an application under Section 125 Cr.P.C. does not finally determine the rights and obligations of the parties and the said section is enacted with a view to provide summary remedy for providing maintenance to a wife, children and parents. After not disputing the paternity of the child and after accepting the fact that marriage ceremony was performed, though not legally perfect as contended, it would hardly lie in the mouth of the appellant to contend in proceeding under Section 125 Cr.P.C. that there was no valid marriage as essential rites according to their respective customs were not performed at the time of said marriage.

The provision under Section 125 cannot be utilized for defeating the rights conferred by the Legislature to the destitute women, children or parents who are victims of social environment.

THE PROTECTION OF WOMEN FROM DOMETSIC VIOLENCE ACT, 2005

This act was established with the main objective to provide protection to wife from violence at the hands of the husband or his relatives.

However, as per Section- 2 (f), it not only applies to a married couple, but also to a ‘relationship in nature of marriage’.

Therefore, considering this the Supreme Court in a couple of cases has allowed live-in relationships to be covered within the ambit of the law specified.

The Respondent-woman claimed that the Petitioner had not disclosed his martital status to her when they had. She also stated the petitioner executed a marriage agreement with her to show his genuineness and responsibility towards her and her child from the previous marriage.

The Single Judge Bench of Hon’ble Justice Subramonium Prasad upheld the order passed by the Addl. Sessions Judge directing the Petitioner-man to pay ad-interim maintenance to his live-in partner under the provisions of Protection of Women from Domestic Violence Act. The Court concluded that the parties were adults and had cohabited for a long time voluntarily.

In the landmark judgement of case, Indra Sarma vs. V.K.V.Sarma

The the Supreme Court illustrated five categories where the concept of live in relationships can be considered and proved in the court of law.

Following are the categories:

The Supreme Court held that a woman who is in a live-in relationship with a man who is already married to someone else will still be considered to be during a “domestic relationship” under the Domestic Violence Act.

And hence the man’s failure to maintain her will amount to “domestic violence” within the meaning of the Act and the woman will be eligible to claim reliefs like maintenance and compensation.

LEGITIMACY OF CHILDREN BORN OUT OF LIVE-IN

The Supreme Court held that, children born out of cohabitation/live-in relationships cannot be treated as illegitimate,

However, there are certain pre-condition like the parents must have cohabited for a considerable amount of time under one roof so that the society recognizes them as husband and wife. And same has been said by the court in other cases that if a man and a woman have been cohabiting for a long period of time then they will be presumed to be legally married unless proved contrary.

This Article has shown that Indian courts through its judgements have recognised and accepted the concept of live-in relationships, and does provide maintenance as per pre-established laws. But this depends on the circumstances of the case.

Therefore, it can be unanimously held that India does need a definite law to resolve this issue.