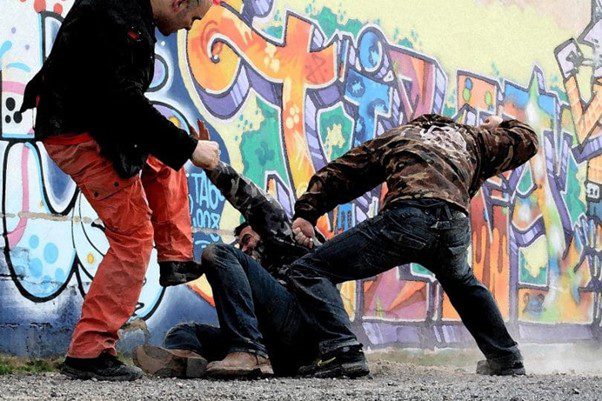 This article deals with a common instance of people getting drunk and ending up quarreling over frivolous matters, resulting with broken jaws and blackened eyeballs. Maybe the other guy landed the first punch or maybe you threw a Hail Mary, whatever maybe the case, you must know the legal recourse when something like this happens to you or someone you care about.

In my first internship experience my mentor dealt with a case of a client (I shall call him Rock) who had gotten himself drunk and in a fight with another man named Kevin (pun most likely intended). Both parties suffered injuries along with damage caused to the property of Kevin.

The next day Kevin got himself medically examined and acquired certificate stating the injuries to be of grievous nature. He then proceeded to file a complaint and register a FIR against the client (Rock). What happened next is an interesting cut to reality.

Filing of an FIR

Upon reaching the local police station Kevin discovered that the police were reluctant to register an FIR and suggested both parties to make amends and seek peace. But this was not the approach Kevin agreed with and hence called his lawyer Vin to assess the situation.

Let’s take a look as what are the possible legal remedies Vin could have suggested to his client Kevin.

What to do when the police refuse to register your FIR?

Option 1: If the police refuse to register any complaint -leaving no possibility of any record of the client visiting the police station and desiring any action, attention or cognizance to their cause-

His advice was to email the complaint to as many state officials of the Department of Police as possible like the DCP, ACP SP. This is deemed as an official record of the perseverance and attempt to put across the information contained in the complaint and the fact that such complaint was refused by the police officials of the respective police station to be registered on official records.

Delay in filing a complaint:

Sometimes a person against whom an offence has been committed decides to file a complaint or FIR in respect such offence, after a long period of time. In such situation police often express their disbelief of the information provided and proceeds to refuse registering a complaint or FIR.

Depending on the seriousness of the offences and how they relate to the penalties, Chapter XXXVI of the Code of Criminal Procedure, which is made up of Sections 467 to 473, establishes specific limitation periods for taking cognizance of various offences respectively. The inclusion of a deadline was justified by the fact that the as time passes and memories fade, witnesses’ evidence becomes less reliable. Consequently, as the data becomes more complex, the likelihood of judgmental errors rises. In addition, the statute of limitations would strain the system to guarantee that the offender is found guilty and punished of the criminal prosecution swiftly, to guarantee prompt justice.

“The question of delay in filing a complaint may be a circumstance to be taken into consideration in arriving at the final verdict. But by itself it affords no ground for dismissing the complaint”

There are other options that one can utilize for the purpose of getting the FIR filed.

Option 2: If the police register the complaint but not the FIR, filing an application before the local magistrate under Section 156 Clause (3) of the CRPC for cognizable offences. If the application is accepted thereafter the magistrate may direct the police to register the FIR and to investigate into the matter.

For the application to be taken into consideration the complainant is expected to have sufficient substantiation upon his reasoning when he/she is asked the following questions by the concerned judicial official:

Option 3: Filing the complaint in the magistrate office for investigation -Section 190 and Section 200 of the CRPC

Section 190 of CrPC- Cognizance of offences by Magistrates.

(a) if a public servant acting or- purporting to act in the discharge of his official duties or a Court has made the complaint; or

Approaching the High Court directly under-

Is approaching the HC an easy tactic of getting my FIR registered by the police?

The High Court of Punjab and Haryana in a case had quoted the of CrPC for the appropriate usage of this remedy. In its observation it stated “if a person has a grievance that his FIR has not been registered by the police station his first remedy is to approach the Superintendent of Police under Section 154(3) CrPC (upon non investigation of a complaint, powers of superior officer to launch probe on a complaint) or other police officer referred to in Section 36 CrPC (powers of a superior officer in police). If despite approaching the superintendent of police or the officer referred to in Section 36 his grievance still persists, then he can approach a magistrate under Section 156(3) CrPC (under which a magistrate can take cognizance of a complaint on failure on the same by police).”

Option 5: Filing an application before the State Human Rights Commission for infringement of rights.

What should be the course of reply and action when the police station upon investigation or filing of a complaint questions the client of having any proof to substantiate his claims.

Statement made or recorded under Section 161 of the CRPC to the investigating officer is an oral testimony and proof enough for the complaint to be registered and initiate investigation. The claims and allegations made therein are meant to be subjected to corroboration with eyewitness testimonies at the time of the trial. During the trail such claims must stand their ground after cross-examinations to be allowed further developments and progress, but only if they don’t, can they be quashed and rejected for consideration and not at the time when they are made by the complaint before the investigating officer.

Now that the complaint had been recorded and the FIR for the offence had been registered at the police station, Kevin anticipated that the police might be reluctant in acting upon the complaint and cause delay and distress in investigation. He called upon to seek advice and express his concern. In response to such apprehensions, Vin counseled him to calm down and strategize his next moves.

We can learn by way of counseling that instead of waiting upon the police to carry out the investigation, one must assume that the police would be reluctant in their functioning and thereby approach the court of law and the magistrate who has jurisdiction over the concerned police station and file an application for sustained attention toward the case and keep the police involved. This might compel the investigating officer to report the progress made on the case to the judicial officer in the form of status reports and strategy adopted. This would help the case to stay alive and reach favorable conclusions for the complainant.

But let’s not forget which side we are on. Remember we had a client named Rock who beat-up this guy Kevin. Till now we know Kevin managed to file an FIR against our client. What could we, as lawyers, do for Rock let’s find out.

So, Rock knew he had blacked Kevin’s eye and broken his car’s windows. He had an idea that this could lead to a criminal case. Hence, he called us to seek advise as to what he should next. So, the first thing he needed from us was not to get arrested which of course meant was getting a bail before the arrest is made. This essentially is the essence of an anticipatory bail.

What is an anticipatory bail and how do I get one?

Direction for grant of bail to person apprehending arrest.

“When any person has reason to believe that he may be arrested on an accusation of having committed a non-bailable offence, he may apply to the High Court or the Court of Session for a direction under this section; and that Court may, if it thinks fit, direct that in the event of such arrest, he shall be released on bail.”

Process of applying for an anticipatory bail:

Why sometimes it is better not to get an anticipatory bail?

Understanding that an anticipatory bail is not the magic cloak for escaping an arrest is imperative. It is a double-edged sword and has its downsides. Once you apply for an anticipatory bail you mark yourself as an accused in the eyes of the police even if you could only be a witness or not even that. The police after the grant of the bail becomes bound to file a chargesheet and proceed against the accused awaiting trial. Hence if you are sure that you are clean and that the police have no reason sufficient enough to have suspicion or bias against you, considering not getting this bail is a good strategy. Having said that if you are considering to get an anticipatory bail it is usually rightly assumed that you are apprehending or anticipating arrest for your actions, you are advised to proceed to get one.

When happens if police refuse to grant bail?

Grounds of refusal could be-

therefore, the argument that the bail application should be denied. Since the bail

Legal discourse if an anticipatory bail is rejected

and then if not succeeded then the sessions court against which the High court and against the Supreme court.