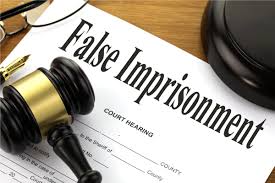 False Imprisonment primarily falls under the category of Trespass. Trespass is the wrong done to a person, including the following kinds of wrongs:-

When a person intentionally restricts another person’s freedom, he can be found liable for false imprisonment in civil and criminal courts.

What is False Imprisonment?

False imprisonment occurs when a person is intentionally restricted by another person in a bounded area without legal justification or consent. It is not the degree of imprisonment that matters, but the lack of lawful justification is important. [1]

This applies to both private as well as government detention. When the restraint is total and the person is prevented from going out of certain limits, the offence is that of wrongful confinement as defined in Section 340 of IPC. [2] The Indian Penal Code punishes wrongful imprisonment under sections 339-348. [3] In case of wrongful arrest by police authorities, proving false imprisonment is enough to obtain the writ of Habeas Corpus. The person doesn’t need to be put behind bars, but he must be confined in an area from which there are no possible ways of escape except the person’s will that has confined him. Depending on the laws of a jurisdiction, wrongful imprisonment can also be a crime and intentional tort.

False imprisonment can come in many forms; physical force is often used, but it isn’t a necessary condition. The restraint of a person may be imposed by physical means (such as being locked in a room) or by unreasonable means (like keeping someone’s jewellery, with the intent to force them to remain at a place).

A. Wilful detention and the intention factor

B. Knowledge of the plaintiff

It is not necessary that the plaintiff alleging false imprisonment had the knowledge of this restraint at the time of his confinement. Proof of a total restraint of freedom is sufficient.

This can be illustrated with the help of a case.

In the case of Herring v Boyle, [4] a schoolmaster wrongfully refused to permit a schoolboy to go with his mother unless she paid an amount alleged to be due to her son. The court held that the refusal to the mother without his being aware of the restraint does not amount to false imprisonment.

In the case of Meering v Graham White Aviation, [5] the plaintiff was asked to go to a room with two work policemen from the Aviation Company. He was told that he was suspicious of theft so he stayed, and the works police stood outside until the metropolitan police arrived. The metropolitan police were asked to restrain him from leaving. Meering was not aware of this. It was held that the act fulfils the requirement for false imprisonment, even if the plaintiff was unaware of it at the time. Meering was entitled to damages.

Any confinement, whether be it prison or any place used temporarily for the purpose of confinement constitutes false imprisonment. It is enough that the plaintiff in any manner has been completely deprived of his liberty, for even the shortest of the time period.

If the plaintiff is restricted from going in certain directions and he is free to go in other directions, there will be no action for false imprisonment. If a person has induced another to put himself in a place which is impossible to leave without such person’s assistance, by words or by other conduct, the refusal to give such assistance in order to detain the plaintiff is sufficient to make such a person liable.

To prove the tort of false imprisonment, the following elements are necessary:

To claim false imprisonment, the plaintiff must reasonably believe that he was confined. Court will determine whether the belief is reasonable by comparing it to what an average reasonable person would do under such circumstances. Additionally, the defendant must have the intent to commit the confinement without lawful justification.

Examples of false imprisonment may include:

Most scholars often use the term “false imprisonment” and “false arrest” interchangeably. False imprisonment has detention without legal process. Accordingly, false imprisonment ends once the victim is held by any process such as when he is bound over by a magistrate. The damages for the claim of a false arrest commence at the time of detention and come to an end when the procedure starts.

The crime of kidnapping is when one person abducts another person to a new place. False imprisonment cannot is different from kidnapping because the person has been taken to a new area. This can involve the use of force, unlawful restraint, and bodily injury.

Defence against false imprisonment is the lack of one of the elements, like:

If a person was detained due to lawful arrest, if they have probable cause to consider a person to have committed wrongdoing; false imprisonment claims are not valid in this case.

B. Consent to Restraint

The existence of probable cause is an absolute defence to claims for false imprisonment. Probable cause is defined as a state of facts that leads a man of reasonable prudence to hold an honest suspicion that the person accused is guilty of the offence charged.

Sometimes imprisonment can be justified if the defendant was acting to support the law. The burden for the legal justification lies on the defendant.

False imprisonment may be because of malicious intent or negligence but the sufferer is the plaintiff, hence while awarding the compensation the place of confinement, time of confinement and force used by the defendant must be kept in mind. These steps will make sure that every person gets due justice.

The tort of false imprisonment is a severe violation of human rights. Prisoners have human rights because ‘prison torture is not the last drug in the Justice system but a confession of failure to do justice to a living man.’ [8] Article 21 and Article 20 re-enforces the same and seek to protect convicts from being let down due to ex post facto laws (Article 20 (a)), double jeopardy (Article 20 (b)) and self-incrimination (Article 20 (c)).[9] However, there are certain remedies available:

A. Action for loss

A person injured by conduct, either knowingly or unknowingly, is entitled to damages. The assessment of damages in false imprisonment cases is left entirely to the court. The basis of the damage includes physical pain to the person, mental suffering and humiliation, loss of earnings and interruptions in occupations, injury to reputation etc.

In the landmark case Rudal Shah vs. State of Bihar, [10] the petitioner, an under-trial was wrongfully confined in jail for several years despite him being set free by the Court. The High Court of Patna stated that as soon as a person under trial is found not guilty by the court, he should be set free. Any detention thereafter shall be unlawful. The State paid a sum of Rs. 30,000 as compensation.

In another landmark case Bhim Singh vs. State of Jammu and Kashmir, [11] the petitioner, MLA of Jammu and Kashmir was there to attend the Assembly meeting. His opponents got him arrested wrongfully with the help of police so as to prevent him from attending the session The Magistrate also granted permission to police without compliance with the mandatory procedure of production of the accused in the Magistrate’s Court before sending him to police custody. He was released after the session got over. The Supreme Court held the State liable for wrongful arrest and detention and ordered a sum of Rs. 50,000 as compensation to be paid to the petitioner.

The general rule in an individual personal tort action is that the plaintiff is entitled to recover an amount that would be equitable. False imprisonment constitutes the basis for the recovery of at least nominal damages, but an award of nominal damages only may be insufficient where the facts have proved the right to greater damages. Mental hurt including fear, shame and hatred of arrogance and humiliation, is generally considered an injury that can be compensated for the action of false imprisonment.

If false imprisonment has recklessly affected the person and constitutes extortion, dishonour, and libel, the jury may go state exemplary and punitive damages to the defendant as punishment. Punitive damages are awarded in cases where the conduct of the defendant is grossly indifferent to the rights of others or knowingly violates those rights. Exemplary damages are provided in certain circumstances when power is misused by the State. Courts have often held that malice in the action of false imprisonment will result in an award for exemplary or punitive damages. Punitive or exemplary damages will not be allowed where false imprisonment was brought in utmost good faith, without malice in law and where no violation of rights took place.

In the landmark judgment of D.K. Basu vs. State of West Bengal, [12] the petitioners raised important issues concerning the police powers and if monetary compensation should be awarded in case of violation of Fundamental Rights, as under Articles 21 and 22 of the Constitution. The court decided that Custodial violence is a huge blow to the Rule of Law, which demands that the executive power should not only arise from and be limited by law. To check the abuse of power by police authorities, the two safeguards laid down by the court were transparency and accountability. 11 directives have been issued by the court where it stated the rights of a detainee and the manner in which the arresting authority is supposed to behave. These rules included the written record of arrest, informing of the person’s family of his arrest, medical examination on request etc.

This writ is considered an effective remedy for immediate release from false imprisonment whether in jail or by a private entity according to English law. The Supreme Court of India and the High Court of States issue this writ under Articles 32c [13] and 226 [14] respectively. It deals with cases of false arrest or prolonged imprisonment by police officers. Where unlawful detention continues, the plaintiff may seek this writ. This writ is also used in criminal cases of false imprisonment. The decision will be that either the prisoner will be released or if the detention is proved then he will be produced before the court for a trial.

After analyzing various case laws pertaining to false imprisonment, it can be concluded that the right of a person to freedom and life with dignity has been guaranteed by the Constitution under Articles 20 and 21 cannot be abrogated and false imprisonment violates the same. The fact that a convict is imprisoned or detained, doesn’t give the authorities any right to torture him. The term of imprisonment is a decisive factor to be taken into consideration in order to compute damages. And while awarding damages for false imprisonment physical or mental hurt has to be kept in mind.

The mere fact that the person has been imprisoned is enough for the claim of compensatory damages if no other injury was caused to the plaintiff. If the person is unlawfully confined by any police authority, then he or any person on his behalf can file the writ of habeas corpus. The person who has the danger of being falsely imprisoned can use reasonable force in order to prevent false arrest. He can use force for self-defence but has to make sure that the force used is reasonable according to the circumstances.