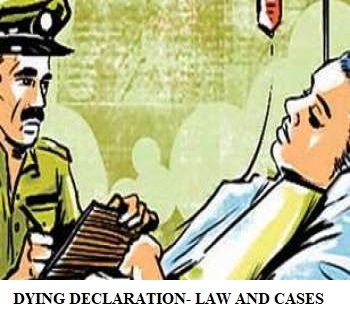 FACTS OF THE CASE
The facts giving rise to the present appeal are that on 15/09/2008 when the appellant and his wife Dhapai Bai were at their home, at that time, the appellant poured kerosene over her and set her ablaze who died in the hospital while being treated. Her MLC was prepared and intimation was also sent to the police and her dying declaration was also recorded by the Executive Magistrate Shankarlal Singade. Thus, the entire case of the prosecution revolves around the said dying declaration. The case was committed to the Court of Sessions and subsequently learned Judge of the Trial Court, after recording the evidence, has convicted the appellant as aforesaid hence this appeal. Learned counsel for the appellant has vehemently argued before this Court to submit that the veracity of dying declaration is highly doubtful and thus it cannot be relied upon for the purposes of convicting the present appellant. Firstly, it is submitted that although it bears a thumb impression but there is no mention as to whose thumb impression it is and secondly in the postmortem report, there is no mention of the fact that the thumb of the deceased was having some ink on it. Thirdly; it is submitted that the aforesaid dying declaration was not read over to the deceased by the Executive Magistrate. Thus, it cannot be said that the Executive Magistrate recorded the same dying declaration which was dictated by the deceased. Counsel has also submitted that the deceased was suffering from mental disease which is also admitted by Pinky who is her daughter-in-law as also Rakesh who happens to be the son of the deceased and the present appellant and stated that the behavior of his father towards his mother was cordial.

JUDGEMENT
In this case, the dying declaration was not relied upon by the Supreme Court and the appellant was acquitted. On perusal of the record, it is found that regarding the thumb impression of the deceased on the dying declaration is concerned, doctor Dixit has also been cross-examined on this point, who has clearly stated that he has given an opinion that the deceased had suffered superficial to deep burns, although it is not mentioned that on which part of the body, which type of burn she has suffered and has also stated that if the patient has suffered superficial burns, his or her fingerprint would be prominent. In the considered opinion of this Court, the dying declaration itself is sufficient to convict the appellant coupled with the other documents which are also placed on record. It is also found that that the sons of the deceased have not supported the case of the prosecution and her daughter-in-law whose statement was also recorded under Section 164 of Cr.P.C. has also not supported the case of the prosecution and have been declared hostile. However, Pancham, who is the brother of the deceased has also affirmed that his brother-in-law the appellant, used to consume liquor a lot and also used to quarrel with the deceased after such drinking. He has also stated that most of the lower limb of the deceased was burnt and upper limb had lesser burn injuries. Bhairam, who is also the resident of the same area has admitted that the appellant was in the habit of heavy drinking, although on other particulars, he has not supported the case of the prosecution. In such facts and circumstances of the case, this Court has no hesitation to come to a conclusion that it was the present appellant only, who had burnt the deceased alive after pouring kerosene over her and thus, the conviction recorded by the learned Judge of the trial Court does not call for any interference. Resultantly, the appeal being devoid of merits, is hereby dismissed.
PRIME LEGAL is a full-service law firm that has won a National Award and has more than 20 years of experience in an array of sectors and practice areas. Prime legal fall into the category of best law firm, best lawyer, best family lawyer, best divorce lawyer, best divorce law firm, best criminal lawyer, best criminal law firm, best consumer lawyer, best civil lawyer.