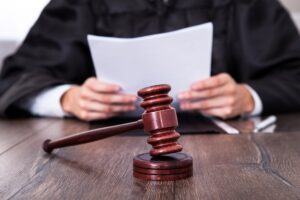 The Karnataka High Court on 8th June 2022 ruled that under Section 216 of the Criminal Procedure Code (Cr. P.C.), the trial court has the power to alter the charge framed even if the trial has proceeded significantly, through the single bench of Justice M Nagaprasanna in the case of Ananda vs State of Karnataka (Criminal Petition No. 1829 of 2022).

The petitioner had filed the present criminal petition under section 482 of Cr.P.C. and prayed to set aside the order dated 31-12-2021 passed by the Addl. District and Sessions Judge.

On 01-12-2016, a complaint was filed alleging that as the victim was walking to school in Masthi, the petitioner asked her to sit on the bike so that she could be dropped off. The victim gets on the bike and they go to Masthi Dinne, where accused 2 and 3 kidnap and take the victim to Halasumaranadoddi. The intention of the kidnapping was to get her married to accused No.4.

The complaint further stated that she escaped the accused’s grip and called the complainant and her relatives. Following that, a complaint was filed against all of the accused, including the petitioner, for offences punishable under Sections 366A, 506, and 34 of the IPC. Following the prosecution’s application on January 25, 2021, the court altered the charge to include Section 7 of the POCSO Act under Section 216 of the Cr.P.C.

The petitioner contended that the order issued by the sessions judge is inconsistent with the law because the charge was altered after three years of the trial commenced, which could not have been done, and because such a charge alteration was based solely on the victim’s statement, which has no relevance on the offence punishable under Section 7 of the Act. Furthermore, the additional charge raises serious doubt about the petitioner. He argued that the victim was brought simply to marry accused No.4 and that no one has committed any act that would constitute an offence punishable under the law.

Respondent, on the contrary, contended that the charge can be altered at any point by the Sessions Judge and that the alteration in charge thus made indicated the offence punishable under the Act.

The bench referred to section 216 of CrPC which reads thus, Court may alter charge. – (1) Any Court may alter or add to any charge at any time before judgement is pronounced. In view of the Apex Court’s judgment and the arguments of the learned counsel arguing for the petitioner, the court determined that the charge can be altered after three years of the commencement of the trial. The court also rejected the prayer seeking to quash the insertion of Section 7 to the Act. It perused that the victim’s statement recorded in the examination in chief and stated that the fact that the victim child had deposed in the examination-in-chief and maintained the same in the cross-examination would indicate that it is a matter for trial, the Court could not at this juncture consider what happened when the victim was carried to a particular place and the victim’s statement is that she was touched inappropriately.  Following the evidence, the prosecution tried to include offences punishable under Section 7 of the Act.