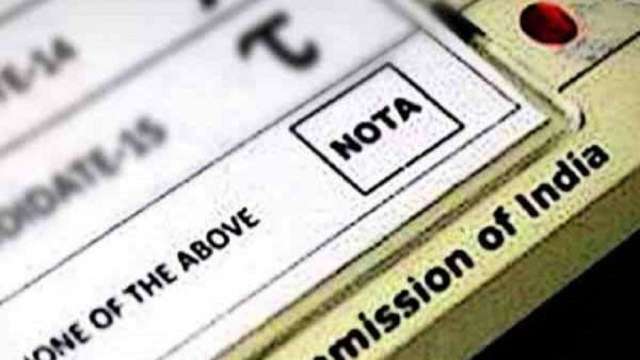 This particular decision is upheld by the High Court of Andhra Pradesh through the learned Division Bench of CHIEF JUSTICE J.K. MAHESHWARI AND JUSTICE B. KRISHNA MOHAN in the case of A.V. Badra Naga Seshayya v. State of A.P. (WRIT PETITION (PIL) No.131 of 2020).

A Public Interest Litigation was filed referring to the amendment introduced in 2018 to the Andhra Pradesh Panchayat Raj (Conduct of Elections) Rules, 2006, wherein a direction was sought to declare the proclamation, attempt or conduct of Andhra Pradesh State Election Commission in not conducting any election/poll for any post where there is only a single candidate in the fray for such post in any constituency, during the ensuing elections to be held for the members of local governing bodies in lieu of notifications and thereby depriving the electors’ of their right to vote in the form of NOTA against such single candidate.

The Court observed that, in the above-stated Rules, insertion was Rule 35-A was done after Rule 35, which was as follows:

(1)“Notwithstanding anything contained in these Rules, in the Postal Ballot Papers and in the Ballot papers used for conduct of poll at polling stations with Ballot Boxes or Electronic Voting Machines (EVMs), provision shall be made for ‘None of the Above’ (NOTA) option for the benefit of those electors who may wish to exercise their option of not voting to any of the candidates in the fray. The last panel of the ballot paper below the last candidate shall be earmarked for ‘None of the Above’ (NOTA) option.

(2) The State Election Commission may give such directions, as may be necessary, for effective implementation of ‘None of the Above’ (NOTA) option.”

In case of Postal Ballot Papers used for conduct of poll at polling stations with Ballot Boxes or Electronic Voting Machines (EVMs), ‘None of the Above’ (NOTA) provision is required to be made.

NOTA applies in case where there is contest of election and as per the language set up in Rule 35-A of the Andhra Pradesh Panchayat Raj (Conduct of Elections) Rules, 2006, when there is an election through Ballot Boxes or EVM’s only then the said option can be exercised.

Hence, Court in view of the fact that, in cases where candidates have been declared uncontested, NOTA cannot be applied, dismissed the present petition.