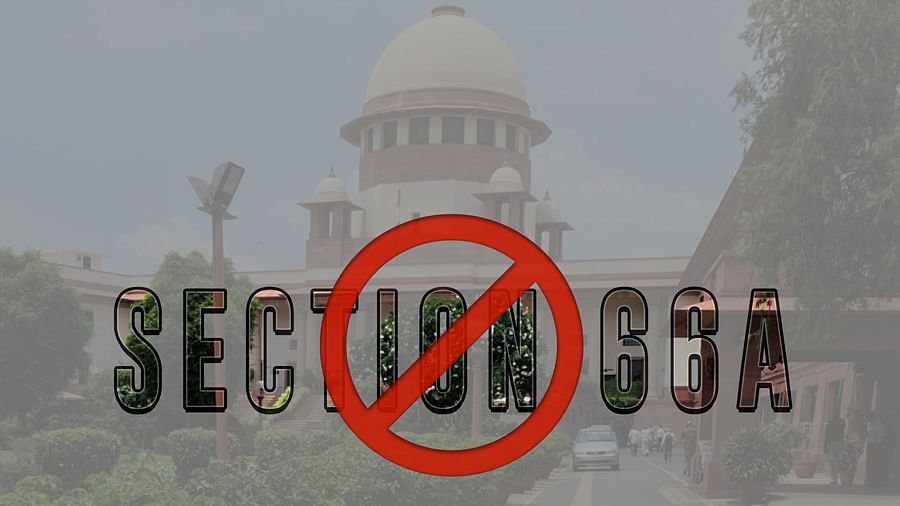 Section 66 (a)[1] of the Information Technology Act, 2000, read as follows: “Any person who sends by any means of a computer resource any information that is grossly offensive or has a menacing character; or any information which he knows to be false, but for the purpose of causing annoyance, inconvenience, danger, obstruction, insult shall be punishable with imprisonment for a term which may extend to three years and with fine.” The provision of Section 66 (a) is a part of the ‘zombie provisions’, which are presently being used as a tool by the police for the prosecution of people years after it has been struck down and been declared as invalid. It is unconstitutional on the grounds that it sweeps protected speech that might be innocent under the rug, hence there is a need for the provision to be repealed that arises on the grounds of it being ‘overbreadth’ which indicates the void nature of the provision.

This section was introduced and used to punish any online communication that was grossly offensive. However, as Justice Nariman commented, “Implementation is a problem.” Section 66 (a) of the Information Technology Act excessively, disproportionately and arbitrarily invaded the fundamental rights of freedom to speech which in turn has a negative effect on the balance between reasonable restrictions and said rights that might have been imposed. This violated the fundamental rights of the citizens under Section 14[2], which guarantees ‘equality before the law’, Section 19 (1) (a)[3], and Section 21[4] of the Constitution of India, which guarantees’ right to life and personal liberty’, that has been enshrined in the Constitution of India. Section 19 (1) (a) guarantees a citizen ‘the right to freedom of speech and expression.’; however, this provision severely impacted and went strikingly opposite the same because it influenced peoples right under the said section.

Reasons behind the scrapping of Section 66 (a) of the Information Technology Act, 2000?

The Supreme Court of India repealed the provision of Section 66 (a) of the IT Act on the 24th of March, 2015. While scrapping the provision made the following observations in its judgment:

– While identifying liberty of thought and expression as ‘cardinal’, the bench observed that the said provision directly affects and influences the citizens’ freedom of speech and expression, ‘right to know’ as guaranteed in the Indian Constitution, which violates and hence contradicts with the Section 19 (1) (a) of the Constitution of India.

– The court also observed that the language used in the provision is vague. Words like ‘grossly offensive’, ‘annoying’, and ‘inconvenient’ are the enshrined grounds for holding a person accountable under the provision and deeming it unconstitutional. This is difficult for both the offender and the law enforcement agency to identify the offence. For this, two UK judgments were used to figure out if the material of the question raised was grossly offensive or just offensive, to which two separate conclusions were derived.

– In the essence of the previous point, the court also observed that if the judicially trained minds derived two different sets of conclusions, then how can the others fairly decide whether something is grossly offensive or offensive at all. It is nearly impossible since it varies, and what may be offensive to one may not necessarily be offensive to the other person.

– NDA governments assurance on ensuring that the provision shall not be misused after the introduction of a few procedures was quashed by the court. The court gave its reasoning based on its observation that ‘Governments come and go, but section 66 (a) will remain forever’ since the government cannot take an undertaking that the future government will not misuse and/or abuse the provision.

The Legal Zombie making the rounds of Supreme Court years after being repealed.

On the 5th of July, 2021, the honourable Supreme Court voiced their astonishment at the event of people still registering First Information Reports (FIRs) under the repealed Section 66 (a) of the I T Act, 2000, which was rescinded in the case of Shreya Singhal v Union of India (2015)[5].

Justice Rohinton Fali Nariman expressed sheer disappointment and shock while hearing an application seeking guidelines on the FIRs that were filed under the provisions of Section 66 (a) of the IT Act, which was filed by PUCL (Peoples Union for Civil Liberties). He further went on to say, “What is going on is terrible.” while remarking that it was a 2015 judgment as soon as he laid eyes on the petition since people are still being prosecuted under this provision which was long struck down.

Even after seven years of the section being repealed, thousands of cases across the country are being filed where the offenders are being prosecuted under Section 66 (a) of the I T Act, stated Senior Advocate Sanjay Parikh, who was appearing for the petitioner in the PIL case. This also shows the level of legal illiteracy present amongst the law enforcers of the country, hinting towards its ‘draconian’ nature. The solution to this illiteracy lies in making police forces independent from the influence of politics and professionalising them. Since it was observed that they seem to be blindly working in the favour of the political parties while disregarding the public by taking recourse to zombie provisions without actually realising the validity and scope of the provisions.

An interesting observation made by Attorney General for India KK Venugopal revealed that even though the division bench struck down the provision, the section is there in the Bare Act. It is written in the footnote only that it has been mentioned that the Supreme Court of India has struck down the provision of Section 66 (a) of the Information Technology Act, 2005. Nonetheless, the police will not look at the footnote, which was commented by the honourable Justice R F Nariman, which circles back to the need of mentioning that it has been repealed right next to the provision of the said section to put an end to this misconduct.

Violation of fundamental rights and why is it happening?

Section 21 of the Constitution of India guarantees’ protection to life and personal liberty’, which is violated due to the dire consequences of the provision since people are still being prosecuted under the scrapped provision. Hence, through the respected high courts, all district courts must be communicated of the entirety of the Section 66 (a) of the I T Act being struck down.

Major inferences that can be drawn from this act is that either the magistrates and few prosecuting agencies are proactive in not giving effect to the landmark judgment in Shreya Singhal or the enforcement relies predominantly on the defendants stimulating the law in to action. These inferences can be drawn from the NCRB data, which supports the observation that even after its ‘constitutional death’, Section 66 (a) of the I T Act continues to have a zombie like undead application across the country in the esteemed courts and the police-stations. The court, in light of this non-compliance, should have undertaken suo moto cognisance of the failure of communication between the states’ branches.

There a lot of zombie provisions like the Section 66 (a) that presently exist in the Indian society, and a simple yet effective solution to this would be to “create a procedure for the automatic tabling of an amendment to give effect to the Supreme Court decision like the rules pushed through under many statutes by the executive.” If these laws are not voted against specifically, then these laws must be circulated in the Gazette of India. In addition, initiating debates on the changing of the Gazette for the inclusion of sections as a constitutional import from the Supreme Court judgments. It is time to put a stop to this injustice, educate the masses about the validity and scope of the provisions so that not one more innocent person can be ‘bit’ or prosecuted under these legal zombies.