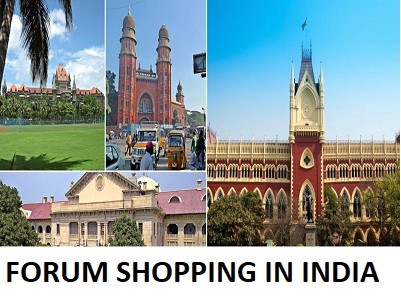 Forum shopping is a practice where litigants file their legal case in a court which they believe is probable of providing a favourable verdict. In a broader context, it is a practice of frequently seeking a dispute resolution forum for a complaint, concern or action, until one is found. Such kind of forum shopping is a clear violation of law and amounts to criminal contempt. A single judge bench comprising of Justice PS Dinesh Kumar, while adjudicating the matter in India Awake for Transparency v. Union of India & Ors, [WRIT PETITION No.172 OF 2021 (GM-RES)]; dealt with the issue of validity of forum shopping in India.

The respondent had raised a preliminary objection with regard to maintainability of writ petitions. In substance, the preliminary objection is, petitioner has filed a public interest litigation with a prayer inter alia for issuance of a writ of mandamus and to direct respondents No.1 to 10 therein to constitute a multi-disciplinary investigation team to investigate and prosecute Mr. A.H. Premji and his associates for the offences alleged to have been committed by them, set out in petitioner’s representations. The Ministry of Corporate Affairs against whom a direction is sought in this writ petition was arrayed as respondent No. 2 in the said PIL. Petitioner has unconditionally withdrawn the PIL. Thereafter, it has filed five separate writ petitions against various statutory authorities.

The respondent has submitted that In view of unconditional withdrawal of the PIL, this petition is not maintainable and liable to be dismissed. The respondent has also submitted that petitioner has also filed a private complaint against the Secretary, Ministry of Corporate Affairs with a prayer to register an ‘Information Report’ on the basis of petitioner’s three letters mentioned therein and to direct an investigation. He submitted that in the said private complaint, list of persons allegedly involved in the commission of offences have been mentioned in the schedule and they are not shown as accused in the cause-title. He argued that such a private complaint is alien to the standard practice because, the accused are required to be described in the cause-title. The response by the petitioner was that the relief sought in the PIL and in this writ petition are not one and the same. If a petitioner seeks different relief on the same cause of action, the doctrine of res judicata does not apply.

The Court upon considering the aforesaid facts has stated that “There remains no doubt that petitioner is indulging in forum shopping on the very same cause of action. This amounts to criminal contempt as the core issue in all these writ petitions is one and the same. In the result, this writ petition is not only devoid of merits, but an absolute abuse of process of law. Though petitioner was forewarned, he chose to argue this writ petition as a stand-alone petition wasting the valuable time of this Court to deal with such frivolous cases. Therefore, imposition of punitive cost is necessary.”