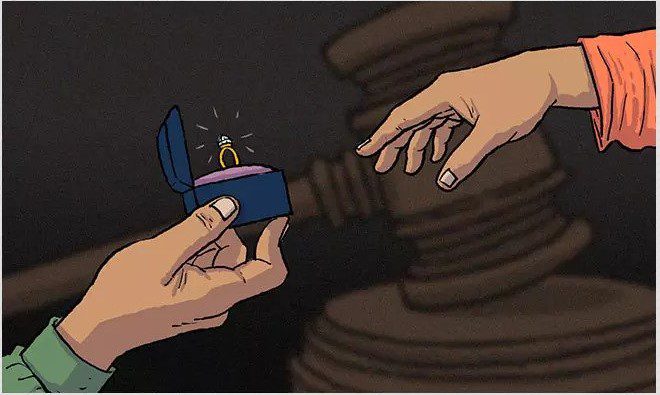 When there are no laws in place to regulate the complexities faced after conversion for marriage, the court can merely examine the existing legislations concerning marriage or conversion, but cannot interfere in the law making process itself.  This was decided in the case of Palash Sarkar vs. State of West Bengal and Ors.[WPA 9734 of 2020] by a  double bench consisting of Hon’ble Chief Justice Thottathil B. Radhakrishnan, and Honb’le Justice Arjit Banerjee in the High Court of Calcutta.

The facts of the case are that the respondent had married the petitioner’s daughter Pallabi Sarkar alias Ayesha Khatun, aged 19.  According to the police report, an appended copy of a statement rendered by her before the Judicial Magistrate under Section 164 of the Code of Criminal Procedure, 1973 includes statements that indicate that she had a relationship with respondent and was willingly living with him. The petitioner apprehends that her daughter has been made to render a statement against her wishes and was coerced into making those statements and his daughter’s statement under Section 164 of the Code may not have been recorded in an atmosphere where she felt comfortable. Hence, this petition was filed calling interference from the court.

The counsel for the petitioner states that the State is actively concealing relevant material from the Court. The contention put forth was that that writ petitions like these may tend to be eye-openers of many more consorted efforts in certain religious denominations to effectuate conversion under the guise of the institution of marriage. It could go on to reveal organized activities of human trafficking and possible flesh trade. She submits that these matters, therefore, be considered further to look into whether any further directions are required to be issued in larger interest of similar hapless  victims

Another important area touched by the counsel was on the need for interference by the judiciary in cases like these which she believed to be of grave consequences. it was stated that in areas where there are no legislation controlling or regulating such religious conversion, the judiciary could consider stepping in to put regulatory measures in place.

The court heard the counsel and said that the pith and substance of all the issues relating to conversion of marriage and acceptability of marriage in terms of personal laws or municipal laws are matters on which the policy making instrument would not be the judiciary.

It categorically stated that “we are of the view that the case in hand is not one where the most critical aspect emanating out of Article 21 of the Constitution may provoke exercise of judicial power on the premise that there is no legislation in place.” It was also observed that the courts may sit in judgment on the validity, enforceability and/or otherwise of any piece of law which may be made by any legislative body

With respect to this particular case, the court observed that it  does not appear that the lady was coerced into making any statement or was under any apparent undue influence or pressure, there may not be much future in the matter. Therefore, the petition was dismissed by the court.