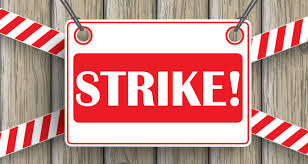 There is a clear prohibition under the law to call for strikes and participate in it and is also an illegal act and should be strictly de-regularized by the government. Kerala High Court gave the above-cited reasons for the judgment in the case of G. Balagopalan vs. State of Kerala [WP(C). No.5752 OF 2019(T)] presided over by the bench of Hon’ble Chief Justice S. Manikumar and Justice Shaji. P Chaly.

In the present case, Petitioner had filed a public interest writ petition for challenging an order passed by the government; giving permission to grant eligible/casual leave to the Government employees and teachers, who had not attended duties during a nation-wide general strike. And following reliefs were asked for through the petition:

The writ petition was filed by the petitioner bringing in the notice of the court of the abuse of powers exercised by respondents in sanctioning eligible leave with salary for the employees under the State Government for all the two days on which, they took part in the general strike against the policies of the Central Government. Petitioner contended that the respondents allowed the govt. employees and teachers to avail casual leave or other eligible leave for 8th and 9th of January, 2019, the days on which they were absent from duty, without availing leave as a part of National General Strike.

Petitioner had contended that those who opposed the general strike in Government services made their signatures in the attendance register and enjoyed eligible salary in the month of January.

Therefore, the HC Bench directed the Heads of the department to scrutinize the attendance registers of the employees and take legal actions if the above-cited allegations came out to be true. HC bench contended that government doesn’t have that liberty to take any policy decision in absolute violation of rules in vogue and the proposition of law laid down by the Hon’ble Apex Court in regard to the illegal strike of the Government servants.

Hence, HC gave the decision by stating that “Government order dated 31.01.2019 issued by the 2nd respondent is illegal, arbitrary, contrary to the statutory provisions, and therefore, liable to be interfered with by this Court under Article 226 of the Constitution of India and are hence, quashed !”

HC rejected the submission of the grant of leave of the employees and stated that “Government cannot take shelter under the guise of a policy decision taken by them. Moreover, it is not an absolute rule that Court cannot interfere with the policy decisions of the Government. Even if it is a policy decision, Court can look into the legality, correctness or arbitrariness of the same, and interfere, by exercising the power under Article 226 of the Constitution of India, if such a policy is against the statutory provisions”. And hence, quashed the State Government order that granted eligible leave to the employees during the nationwide strike on 8th and 9th January 2019.