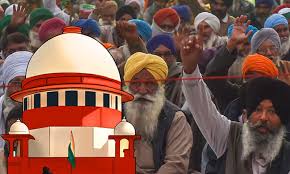 The three controversial farm laws i.e., Farmers (Empowerment & Protection) Agreement of Price Assurance & Farm Services Act 2020, Farmers Produce Trade & Commerce (Promotion & Facilitation) Act & Amendment to Essential Commodities Act, introduced by the Centre in 2020 are stayed by the Supreme Court of India until further orders. Due to these laws’ farmers all over the country especially in North India have expressed their dissent and are protesting against it. The Supreme Court presided over by CJI SA Bobde, J AS Bopanna & J V Ramasubramanian laid down this order on 12/01/2021.

The Supreme Court carefully analyzed the arguments put forward by the Central Government made through Attorney General KK Venugopal. The Central Government received information that the Khalistanis have infiltrated the protest. The Centre have further submitted that the laws are Constitutional and within the legislative competence. Whereas the Farmer’s Union have submitted that the three farm laws are illegal, arbitrary and unconstitutional. They further submitted that, “They will pave the way for cartelization and commercialization of agriculture produced and if allowed to stand will completely ruin our country as the corporates can, with one stroke, export our agriculture produce without any regulation.”

The Supreme Court on Tuesday have issued a stay on all the three laws until further orders and has further directed for a formation of a four-member committee in order to hear all the parties and stakeholders. The Committee will make a report on all the submissions made by the parties and stakeholders so that the Court gets a clear picture regarding the validity and constitutionality of the laws. The four-member committee comprises of Bhupinder Singh Mann (National President of Bharatiya Kisan Union), Dr. Pramod Kumar Joshi, Ashok Gulati (Agricultural Economist) and Anil Ghanwat (President of Shetkari Sanghatana).

The Supreme Court further elaborating on the report stated that, “Every person who is genuinely interested in solving the problem is expected to go before the Committee. The Committee will not punish you or pass any orders. It will submit a report to us.”

[Detailed Order of the Supreme Court will be uploaded soon.]