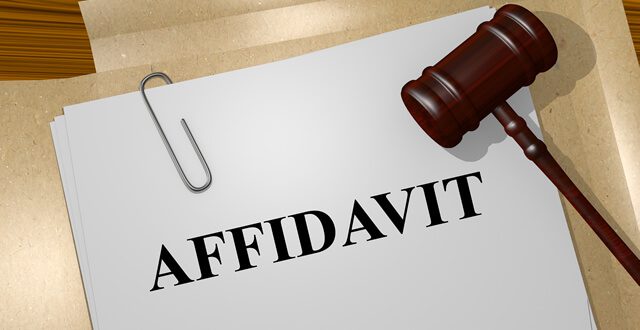 What is an affidavit?

An affidavit (/ˌæfɪˈdeɪvɪt/ (listen) AF-ih-DAY-vit; Medieval Latin for “declared under oath”) is a written declaration voluntarily made by a relative or deponent under oath or declaration administered by a person legally authorized to do so. Such declaration of authenticity of the signature of the counterpart is witnessed by the compositor, such as a notary public or commissioner of oaths. An affidavit is a type of verified statement or evidence, or in other words contains a verification, which means that it is made under oath under penalty of perjury, and this serves as evidence of its truth and is required in court proceedings.

An affidavit is typically defined as a written declaration or statement that is sworn or affirmed before a person who has authority to administer an oath. There is no general defined form for an affidavit, although for some proceedings an affidavit must satisfy legal or statutory requirements in order to be considered.[1] An affidavit may include,

In some cases, an introductory clause, called a preamble, is added attesting that the affiant personally appeared before the authenticating authority. An affidavit may also recite that the statement it records was made under penalty of perjury.

An affidavit that is prepared for use within the context of litigation may also include a caption that identifies the venue and parties to the relevant judicial proceedings.

Rule 3 Order XIX of the Code of Civil Procedure of 1908 “Matters to which affidavits shall be limited” Affidavits shall be limited to such facts as the pleader is able to prove to the best of his knowledge, except in applications for injunctive relief where declarations of his belief may to be accepted; provided reasons are given. The costs of any affidavit which will unnecessarily set forth matters of hearsay or dispute, or copies or extracts from documents, shall be paid (unless otherwise ordered by the Court) by the party filing them.

Format and Guidelines for Affidavit of Evidence

The affidavit must comply with the form and requirements below:-

(a) such affidavit should be limited to the dates and events relevant to the proof of any fact or any other matter and should follow their chronological order;

(c) each paragraph of the affidavit should, as far as possible, be limited to a distinct part of the subject matter;

(i) which of the statements therein are made within the deponent’s own knowledge and which are matters of information or belief; and

(ii) the source of any information or belief.

(ii) be divided into numbered paragraphs;

(iii) have all figures, including dates, expressed in figures; and

On 2 March 2016, the High Court of Australia ruled that the ACT Uniform Evidence Legislation is neutral in the way in which certified evidence is treated as evidence of equal weight.[2]

The term “affidavit” is not used in the UK.[3][verification failed][doubtful – discuss] The usual term is “surrogate affidavit”.[cit.

In Sri Lanka, under the Oaths Ordinance, except in a court-martial, a person may produce an affidavit signed in the presence of an officer of oaths or a magistrate.

Affidavits are made in a similar way to England and Wales, although the “swear” is sometimes omitted. A certified affidavit can be substituted for an affidavit in most cases for those opposed to oaths. The person making the affidavit is known as the deponent and signs the affidavit. The affidavit is in the standard format “sworn/affirmed (declared) before me, [name of oath commissioner/attorney], agent for oaths (attorney), on 2023 at [place] in the county/city of [county/city ], and I know the deponent”, and is signed and sealed by the Commissioner for Oaths. It is important that the Commissioner clearly states his name, sometimes documents are rejected when the name cannot be ascertained.

In August 2020, a new method of submitting sworn statements entered into force. Under Section 21 of the Civil and Criminal Law (Miscellaneous Provisions) Act 2020, witnesses are no longer required to swear before God or make an affidavit when giving an affidavit. Instead, witnesses will make a non-religious “statement of truth” and, if breached, face up to one year in prison on summary conviction, or up to a €250,000 fine or imprisonment on conviction on indictment. for a period not exceeding 5 years, or both.

This is designed to replace affidavits and affidavits in situations where electronic means are used to serve or serve documents in court set out in section 20. It has yet to be widely adopted as of January 2022 and is expected to be out of use for some time lay litigants who will still submit documents in person.

In American jurisprudence, hearsay rules make it unusual to admit an uncorroborated affidavit into evidence (especially when the counterpart is unavailable for cross-examination) with respect to material facts that may be dispositive of the case at bar. Affidavits from persons who are dead or otherwise incapacitated, or who cannot be found or made to appear, may be accepted by the court, but usually only in the presence of corroborating evidence. An affidavit that reflected a better grasp of facts close to the actual events can be used to refresh a witness’s memory. Materials used to refresh memory are admissible in evidence. If the party in the case is an opposing party, the opposing party may be successful in having the affidavit admitted into evidence because the opposing party’s statements are admissible through an exception to the hearsay rule.

Affidavits are usually part of the answer to interrogatories.[6][7] However, pleadings for admissions under Federal Rule of Civil Procedure 36 need not be sworn.[8][9]

Some types of motions will not be accepted by the court unless they are accompanied by an independent affidavit or other evidence to support the necessity of the motion. In such a case, the court will accept the petitioner’s affidavit in support of the motion under certain conditions: An affidavit instead of sworn testimony promotes judicial economy. A lawyer is an officer of the court and knows that his perjury, if discovered, can be grounds for severe punishment up to and including disbarment. A lawyer, if called upon, would be able to present independent and more detailed evidence to prove the facts stated in his affidavit.

Acceptance of an affidavit by one company does not confirm its acceptance as a legal document in other jurisdictions. Likewise, it is not self-evident to accept that a lawyer is an officer of the court (under oath). This matter is addressed by the use of an apostille, a means of confirming the legalization of a document for international use under the terms of the 1961 Hague Convention Abolishing the Requirement for Legalization of Foreign Public Documents. Documents that have been notarized and some other documents and then verified by the corresponding apostille are accepted for legal use in all countries that have signed the Hague Convention. Thus, most affidavits now require apostillation if they are used for cross-border matters.

How to make an affidavit legal?

The person who wants to get an affidavit registered must first make the document ready complying with all the rules of making an affidavit which is mentioned above then he must approach a notary officer who usually stays near the court complexes.

Some notary officers can also be found in other places, and some can be found online.

Visit one of the notary officers (there are state government and national government officers both are same) and hand over the affidavit and ask them to notarize it, once notarized they will ask for a price which you must pay for it to be legally valid)