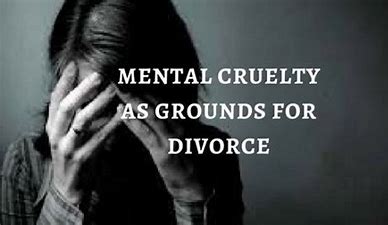 Mental Cruelty a ground for divorce: According to Section 13(i) (a) of the Hindu Marriage Act, 1955, mental cruelty is broadly defined as that moment when either party causes mental pain, agony, or suffering of such a magnitude that it severs the bond between the wife and husband and as a result of which it becomes impossible for the party who has suffered to live with the other party.

In case Smt. Monika Gupta vs Jitendra Gandhi (FIRST APPEAL No.- 60 of 2016) with (FIRST APPEAL No.- 61 2016), Allahabad High Court learned bench led by HONOURABLE JUSTICE PRADEEP KUMAR SINGH BAGHEL and JUSTICE HONOURABLE ROHIT RANJAN AGARWAL it was held that A wife subjected to mental cruelty is entitled to a decree of divorce when there is no chance of survival remains.

FACTS OF THE CASE: This case was filed by the appellant, Smt. Monika against the defendant/respondent for annulling the marriage. Another case was filed by the respondent, Jitendra Gandhi for restitution of conjugal rights. The said case was transferred to the Family Court by orders of the Supreme Court. Both the cases were tried together by the Court below and were decided by a common order.

Plaintiff filed case for annulling the marriage on the ground that she was married to the defendant according to Hindu rites and customs. It was contended that when she was 7 years old, both her parents died, and she was brought up along with her two brothers by her maternal uncle and aunt. It is they who had performed the ceremony of ‘Kanyadan’ and gave dowry as per their status. It was contended that after marriage, there was a constant demand for dowry by the in-laws and the appellant was not treated well. For three weeks, she stayed at her in-law’s house and, thereafter came to her maternal home along with her brother and after living for 15 days, she again went back to her in-law’s house from where her husband took her to Gujarat. It has been stated that in Gujarat, the respondent started pressurizing the appellant for sharing bed and having physical relations with his friends, on refusing to do so, she was beaten by her husband. Appellant had intimated this to her in-laws, but they were not helpful and scolded her saying a wife has to obey her husband. She then returned with her brother to her maternal home at Jhansi.