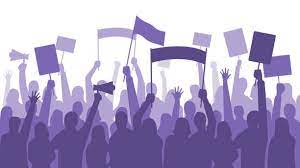 The High Court of Kerala, through learned judge, Justice PV Kunhikrishnan in the case of R Ramaraja Varma v State of Kerala (WP(C) NO. 16371 OF 2022) observed that organisers of political rallies can be held responsible in circumstances wherein participants of the rally make provocative statements.

BRIEF FACTS OF THE CASE:  A writ petition was moved by the petitioner a day before the scheduled date of the rally seeking prohibition on marches, mass drills, and motorcycle rallies, public conferences in the ‘Jana Maha Sammelanam’ that was to be organised on May 21, 2022 by PFI in Alappuzha. The petitioner, in this regard, cited several violent attacks and political murders that happened in the Alappuzha district over the last months. The court directed the district police chief to ensure that law and order were ensured at the rally. However, on May 21st, Bajrang Dal conducted the bike rally without permission. A case was registered against them at Alappuzha North Police Station under Sections 147, 149 & 283 IPC. Following this incident, Popular Front of India conducted the Rally at Alappuzha Town. This rally was in violation of the conditions issued by the district administration while granting sanction for their programme. A case was registered against them at Alappuzha South Police Station under Sections 143, 147, 149, 283 of IPC & Sec 6 (1) The Kerala Public Ways (Restriction of Assemblies and Processions) Act 2011 for creating traffic obstruction in Alappuzha Town. The Police authorities had taken all reasonable measures to contain law & order during the rally. However, provocative slogans were raised by participants of the rally organised by Popular Front. Two people were arrested in this regard. A video of a minor boy raising provocative slogans during the rally had gone viral on various social media platforms.

FINDINGS OF THE COURT: The court opined that if a rally member raises provocative slogans, the organisers of the rally are equally culpable. If a rally is held, it is the responsibility of the organisers of the rally to keep the rally’s participants under control. The police are in charge of investigating whether the rally attendees raised the offensive slogan with the leaders’ knowledge or whether there was any collusion between the rally organisers and those who raised the controversial slogans. The court observed that, prima facie, the organisers of the rally, are to be held responsible. The court opined that they should be named as defendants in the case, and the police should investigate the matter. Justice PV Kunhikrishnan closed the petition on the endnote that the police should investigate the situation independently of any observations made in the judgement.