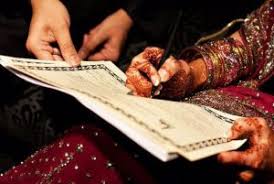 The present matter before the Punjab High Court involves a criminal Writ Petition under Article 226/227 of the Constitution of India for issuing a writ in the nature of mandamus directing respondent Nos.2 and 3, specifically the State authorities to protect the life and liberty of the petitioners at the hands of private respondent Nos.4 to 6. The bench of Sudip Ahluwalia J. encountered the tenets of Mohmeddan law in respect of matrimony wherein the marriage of the petitioners stood threatened in Aasma v State of Haryana [CRWP-1148-2021].

In the present case, both the petitioners are Muslims by religion. They fell in love and decided to perform Nikah. The date of birth of petitioner No.1 is 27.07.2004 and that of petitioner No.2 is 13.09.1996 as per their Aadhar Cards, respectively. Both the petitioners have solemnized their Nikah on 21.01.2021 as per Muslim rites and ceremonies. It was contended on behalf of the petitioners that this was the first marriage of both the petitioners. Further reliance was placed upon the decisions by this Court in Kammu vs. State of Haryana & Ors [2010(4) RCR (Civil) 716]; Yunus Khan vs. State of Haryana & Ors. [2014(3) RCR (Criminal) 518] and Mohd. Samim vs. State of Haryana & Ors.[2019 (1) RCR (Criminal) 685] to contend that in Muslim law puberty and majority are one and the same and that there is a presumption that a person attains majority at the age of 15 years. It was further contented that a Muslim boy or Muslim girl who has attained puberty is at liberty to marry any one he or she likes and the guardian has no right to interfere.
The law, as laid down in various judgments cited above, is clear that the marriage of a Muslim girl is governed by the Muslim Personal Law. As per Article 195 from the book ‘Principles of Mohammedan Law by Sir Dinshah Fardunji Mulla’, the petitioner No.1 being over 16 years of age was competent to enter into a contract of marriage with a person of her choice. Petitioner No.1 is stated to be more than 36 years of age.

Thus, both the petitioners are of marriageable age as envisaged by Muslim Personal Law. In any event, the issue in hand is not with regard to the validity of the marriage but to address the apprehension raised by the petitioners of danger to their life and liberty at the hands of the private respondents and to provide them protection as envisaged under Article 21 of the Constitution of India. Article 21 of the Constitution of India provides for protection of life and personal liberty and further lays down that no person shall be deprived of his or her life and personal liberty except as per the procedure established by law. The Court opined that it cannot shut its eyes to the fact that the apprehension of the petitioners needs to be addressed. Merely because the petitioners have got married against the wishes of their family members, they cannot possibly be deprived of the fundamental rights as envisaged in the Constitution of India.

The court in light of the above discussion, sounded judgment that, “Without expressing any opinion with regard to the veracity of the contents of the petition and the submissions made by learned counsel for the petitioners, the present petition is disposed of with a direction to the Superintendent of Police, Yamuna Nagar, District Yamuna Nagar (Haryana) (respondent No.2) to decide the representation of the petitioners dated 01.02.2021 (Annexure P-5) and take necessary action as per law.”

The Court further held that the order would not ipso facto amount to grant any seal of approval on the legality of petitioners’ marriage, which essentially would come in the domain of the concerned Matrimonial Courts. Further, they would not be entitled for any protection against their arrest or continuance of any criminal proceedings, if otherwise, found to be involved in commission of any cognizable offence(s).