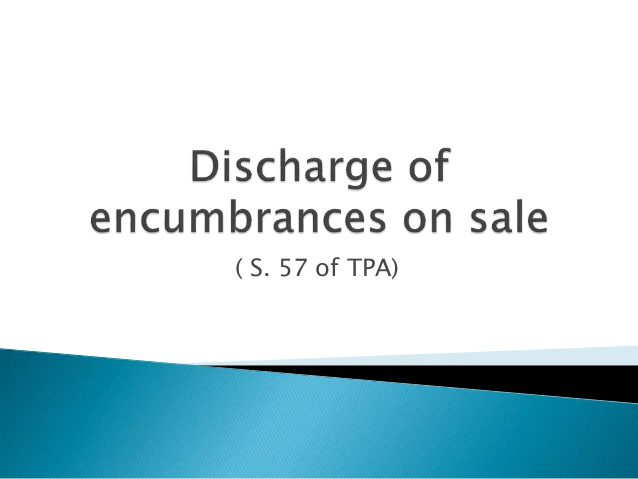 The object behind Section 57 of the TP Act is indisputable from its tenor that it is proposed to help any gathering to the offer of a resolute property, which is dependent upon an encumbrance, to fructify the deal for its reasonable worth in the wake of getting in-store – for installment to the encumbrancer – the promoted worth of the periodical charge, or the capital entirety charged on the property, together with accidental charges. It subsequently empowers the gatherings to a deal to conjure the locale of the court to satisfy their contracts, despite the encumbrances on the property. The judgment passed by the Kerala High Court (High Court), in its decision in MP Varghese v Annamma Yacob & Ors (MFA No 47/2020)  by Hon’ble Shri Justice Devan Ramachandran

The appellant council argued that Section 57 of the TPA applied to ‘out of court’ sales as well, that is, sale transaction which is not arranged by the court, as is showed by the utilization of the words ‘or out of court’ in Section 57(a) of the TPA.

The High Court, while examining Section 57 of the TPA meticulously from both its academic and practical ambits described it as “a very efficacious, substantive and procedural mechanism to facilitate the realization of the deserving and intrinsic value of encumbered estates and other immovable properties

The High Court further struck down the wrong understanding by the District Court to the degree that the Section 57 can be conjured solely after the sale is finished and rather explained unequivocally that help of the court can be looked for even while the sale is proposed.

The High Court allowed the appeal and set aside the impugned order of the District Court, consequently, permitting the appellant to tender the amount of INR 500 to the first respondent, by depositing it in the District Court; in which event, the same will be entitled to be withdrawn by her. The High Court further declared that on such payment by the appellant, the Appellant’s Property will stand freed from the charge on it, created in pursuance of the terms of the Partition Deed.