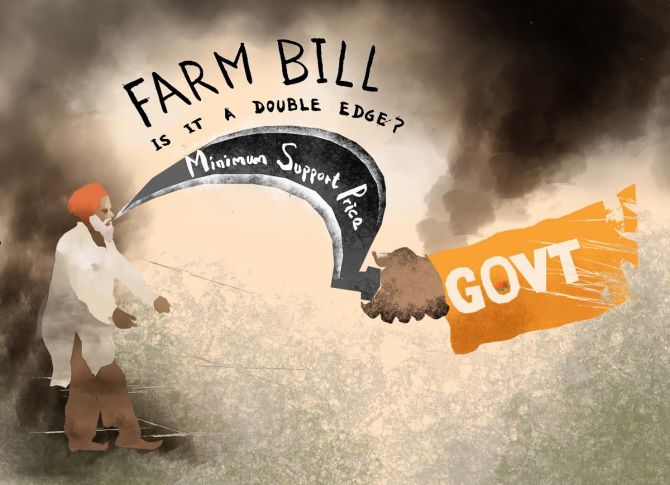 This article discusses the aspects of the three Farm bills which has recently been passed by the parliament. We have incorporated the previous laws which gave way to this new law which has become a topic of discussion.

After India got independence in the year 1947, started selling their agricultural produce directly to the consumers in the local markets. But because of the zamindari system and other social conditions which was prevalent during that time, most of the farmers had to encore huge losses and were under debt. Most of them took loan from various creditors and they charged massive interest on them. Also when these farmers were unable to pay the loan, the money lenders bought the agricultural produce at a much lower rate. So what happened was that in order to grow crops in the next season, these farmers took another loan and this vicious cycle continued and there was no end to it. Later with the Mandi system and APMC’s the system became much hostile.

What are the three bills?

What was the need to introduce the bills?

Why are our farmers poor? Because our farmers are price takers. They buy inputs like seeds, fertilizers, pesticides at retail prices, but sell its output i.e. their produce at wholesale prices. In both these cases, the farmer is the price taker not the maker. Nearly 70% of Indian farmers have land holding less than 2.5 acres which means that small land translates to smaller crop output which also means Lesser produce and much lesser bargaining power. After the zamindari system was abolished in India, the farmlands were split into smaller pieces, the tillers became the owner of such small land but they did not have any bargaining power and traders started exploiting them on such ground. Traders used to extend credit then buy produce from the farmers in harvest season at low prices. The farmers would stay poor because he never got a good price. So the question is what is the correct price and who will decide the correct price for the farmers? To answer this question, in the 1960s, when the country was going through Green Revolution there emerged APMC’s which are also called as Mandis which started regulating farm produce. With the emergence of these APMC’s, nobody was allowed to buy produce from the farmers except from the mandis, also APMC’s would give a license and space to traders to buy. The idea was quiet appealing as mandis have different traders who negotiate with the farmers and decide the price at various quoted prices which gave farmers their choice and options. the reality was far behind what was expected, the mandis had no farmers who were quoting the prices, rather the mandis had traders and the cartels who were negotiating the price became the brutal truth. So the farmers were the price takers and not the ones quoting. The traders formed their majority and cartels to quote one same price which was less or almost equivalent to the MSP (minimum selling/ support price). This mandi system was not perfect, the mandis were only a handful, around 7000 mandis all over India. National committee of Farmers said for mandis to be successful, there should be one mandi in every five kilometer range. As a result, only 40% of the total produce is sold in the mandis, most of the farmers cannot even make it to transport their produce to these mandis and sell the produce to unlicensed traders of their own area at whichever price they quote. As a result, three out of four farmers today are planning to leave farming because the market needs good buyers who can pay enough to these farmers. Thus all these factors gave way to introduce the bills.

The three bills at a glance:

These laws claim to bring farmers closer to the market by altering where they can sell, the ability to store produce, and whether they can enter into contracts. It may be full of amazement that the farmers were confined to the following terms to date. Let us further explore the laws why these restrictions were present in the first place.

The Farmers Produce Trade and Commerce (Promotion and Facilitation) Ordinance, 2020

According to this law, a farmer can sell his produce anywhere in the country under the scheme of ‘One Nation- One Market’. Initially as per ECA which restrained the framers to sell their produce anywhere in the country and were forced to sell originally in the mandis of their state. These mandis were government- approved mandis’ called as ‘Agriculture Product Market Committees’, were state- operated where farmers sell their products to the traders or middlemen who then sell the products to the consumers throughout the nation. These APMCs protected the interest of the farmers from big retailers and ensure that process do not get too high. Also that the produce is sold at MSP and not anything less than that.

(i) limits the operation of APMC laws by states to the market yards
(ii) Allows private parties to set up online trading platforms for trading in agricultural commodities by avoiding the middlemen
(iii) Sets up a dispute-resolution mechanism for buyers and farmers to be operated by a sub-divisional magistrate.

Benefit and problems of this act:

We must not forget here that this bill has not eradicated the previous APMCs rather it has provided another ecosystem to the farmers and now they have to decide where to sell and how to sell which have given them multiple options too.

The Farmers (Empowerment and Protection) Agreement on Price Assurance and Farm Services Ordinance, 2020

According to this bill the farmers and the consumers, the corporate firms and buyers can directly enter into a contractual farm agreement which means farmers can make contract with the buyers. The benefit that the farmers will receive through this bill is that the price assurance which they will receive even before sowing their produce.

The benefit and loss regarding this bill:

Let’s discuss the three bills with examples. Let’s talk about tomatoes, MC Donald’s and how they can make a contract with these farmers. As per the bills, the company can ask the farmers to produce certain size and quality of tomatoes and at the same quoted price throughout the year. This means that the farmers can sell the tomatoes at rs. 20 to the company when it is at rs.13 in January or at rs.19 in May and still earn the profit. The benefit of this contract farming is that the price is decided in advance also the farmers can ask for advance payments and buy raw materials with the money received. Before such bill, this contract system was there but it was recorded in the mandis. Moreover, a certain fixed sum had to be paid to these middle men in the mandis whereas when these middle men are removed both the parties can be benefited.

Of all the 3 bills that have been passed, it is the ECA which was long overdue. The ECA has its roots in WW2 where laws were implemented by the British to exploit the supply within the country. The bill places restrictions on the storage of essential commodities like pulses, oilseeds, onions, etc. but has now been amended. The amended ECA reduces the power that states and the centre have.

Benefits and problem with hoarding of essential commodities:

Also since there are buffer stocks in the country which is being mismanaged, India faces hunger and food shortage.

Now where government says these bills will change the life of the farmers but still, farmers are protesting?

The flaws lie on the concept that only 6% farmers know about MSP, and there is no uniform method of price discovery for non MSP crops, traders do not buy on MSP and the government does not procure all the produce. The root cause of all the exploitation lies on the fact that the farmers do not know what should be the fair value of their produce. Whether it be from the mandis or contract farming, the fair value is unknown as prices change with area. So how should price discovery be done like we have stock exchange to check the share prices, similarly we must have a system where these farmers can unite and quote the correct price. Also farmers can refer NCDEX and MCX as the base for the price of their commodities. The bargaining power of farmers lies in the unity of farmers and they need to form such organizations and the government should take such steps to unite them. The bills can be a progressive step only when the loopholes are removed.

One of the reasons why there has been a lot of uproar throughout the country is due to the unconstitutional way in which the laws were passed as it is the state governments that regulate these aspects. The government should have included the opposition and also taken into account the voice of farmers in order to plug the loopholes in the bills.

This would not only create an assisted approach towards privatizing the sector but also avoid further exploitation. But unfortunately, the bills due to not being communicated appropriately have created an air of mistrust between the ruling, opposition, and the farmers.