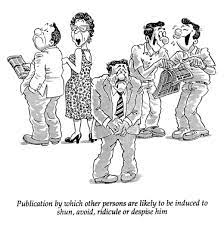 Section 499: Defamation– Anyone who, by words spoken or intended to be read, or by signs or visible representations, makes or publishes any imputation concerning any person with the intent to harm, or knowing or having reason to believe that such imputation will harm that person’s reputation, is said to defame that person, except in the cases hereinafter expected.

Section 482 of CrPC: When the court believes that the accused is wrongfully implicated in the case with the intent to hurt his honor and dignity, the high court might quash the F.I.R. by exercising its exceptional power granted in section 482 of the CrPC. Both compoundable and non-compoundable cases are attracted to the authority to quash under this clause.

Learned bench led by HONOURABLE JUSTICE DR. YOGENDRA KUMAR SRIVASTAVA in Rajesh Churiwala Vs State of U.P and Others (APPLICATION U/S 482 No. – 10431 of 2021), Allahabad High Court held that this Court is not inclined to entertain the application in exercise of its inherent jurisdiction under Section 482 Cr.P.C. and that this application stands dismissed.

This application u/s 482 CrPC has been filed seeking to quash the proceedings of Complaint Case, Mohan Lal Saravagi Vs. Rajesh Churiwala, u/s 500 IPC, pending before the Additional Chief Judicial Magistrate Court, within a stipulated time period.

SUBMISSIONS MADE BY THE COUNSELS: Counsel for the petitioner submitted that he has also attempted to challenge the summons order. The only argument raised to dispute the proceedings is that the violation under Statute 499 IPC is not made out because the case falls within the first exemption to the section, which states that if the imputation is made for the public good, it does not constitute defamation.

and the same cannot be taken as a ground to seek quashing of the proceedings.

JUDGEMENT: With the foregoing in mind, the Hon’ble Court decided that they are hesitant to accept the present case in the exercise of its inherent jurisdiction under Section 482 CrPC and as a result, the application is denied.