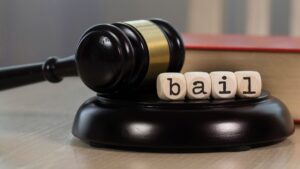 The Supreme Court, in a recent judgement, observed that merely because the case of the prosecution rests on weak circumstantial evidence, it is not a ground for the High Court to grant bail to the accused. This was held by a supreme court bench comprising of Justice Mr. Shah and Justice Sanjiv Khanna, in the case concerning Ishwarji Nagaji Mali v State of Gujarat & Another, decided on January 18,2022.

The appeal arose from the appellant’s grievance due to the High Court order granting bail to the respondent, accused of criminal conspiracy and murder of the appellants’ daughter.

The deceased was hit by a car while she was on a walk along with her husband (the respondent). Later upon investigation, it was discovered that the husband of the deceased and his friend had planned the murder by paying two lacs to swift driver. The evidence to this was the telephonic conversation between the two. Upon this, the respondent was arrested. However, upon filing a bail application, he was released by stating that there was no actual evidence and the case was based upon circumstantial evidence, which is regarded to be weak.

The precedents set in the following cases were referred to -Gudikanti Narasimhulu & Ors. vs. Public Prosecutor, Prahlad Singh Bhati vs. NCT of Delhi & ORS, Ram Govind Upadhyay vs. Sudarshan Singh, Kalyan Chandra Sarkar vs. Rajesh Ranjan alias Pappu Yadav & Anr., Prasanta Kumar Sarkar vs. Ashis Chaterjee, Neeru Yadav vs. State of UP & Anr and Anil Kumar Yadav vs. State (NCT of Delhi). By stating the above mentioned, precedents the appellant showed how the bail granted was unsustainable both on law and facts.

The bench after observing the law, precedents and facts of the preset case quashed the bail granted by the High Court. The Court stated that merely because the case of the prosecution lies on the basis of circumstantial evidence, the bail could not have been granted. The High Court had to look into the seriousness of the matter and not overlook any material fact or evidence.

Therefore, the appeal was allowed and the respondent was ordered to surrender to the concerned authorities.