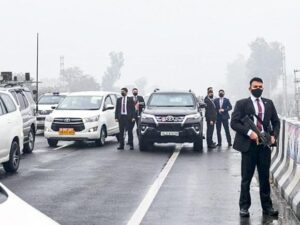 The petitioner, an NGO named Lawyer’s Voice filed a petition in the supreme court and demanded recognition of the issue of serious security lapse and probe an independent enquiry committee to find out the reasons of the breach. The petition was brought before a supreme court bench comprising of CJI NV Ramana, Justice Surya Kant and Justice Hima Kohli in the matters between Lawyer’s voice v State of Punjab & Others. WRIT PETITION (CIVIL) No. 13 OF 2022 decided on 12th January, 2022.

The issue arose after an incident on 5th of January, 2022, where the convoy of the Prime Minister (PM) was stuck on a flyover for twenty minutes, while he was on visit to Hussainiwala, District Firozpur, State of Punjab. The matter was taken up on 7th of January, 2022 in the Supreme Court where the arguments were presented by Mr. Maninder Singh, Senior Advocate on behalf of the petitioner and by Mr. Tushar Mehta, SGI, on behalf of Union of India and Mr. DS Patwalia, learned advocate on behalf of State of Punjab.

Before the hearing, a committee was constituted by the State of Punjab to issue a probe into the lapses that led to the PM’s security breach on his visit to the State. However, it was submitted by the petitioners that it is unfair to make the State a judge of its own actions and an independent enquiry into the issue is needed. It was submitted by the respondent’s council that the Ministry of Home Affairs and Government of India had already held the State of Punjab ‘guilty’ for this security lapse even though there was no omission of responsibility from their side. Adding to this, the state expressed its willingness for an independent enquiry.

The matter was discussed at length going into the provisions of Special Protection Group Act, 1908 and the Bluebook. It was observed that the solution is not only to hold the officers responsible for this liable but also look into the seriousness of the matter and ensure that such incidents do not take place.

The court ruled out that there is a need for independent enquiry into this issue and for that appointment for a committee is required. A committee comprising of Justice Indu Malhotra, a former Judge of the Supreme Court of  India­ Chairperson; Director General or his nominee not below the rank of Inspector  General of  Police of  National  Investigation Agency­ Member; Director   General   of   Police,   Union   Territory   of Chandigarh­ Member; Additional Director General of Police (Security), State of Punjab­ Member; and Registrar General, Punjab and Haryana High Court- Member ­cum ­Coordinator has been appointed by the Supreme Court to probe an independent enquiry into the breach of security issue and  to look into the causes of the breach; find out the extent of responsibleness and suggest measures which can avoid such instances.