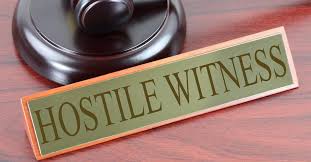 Hostile witnesses are those whose testimony on direct examination is either openly antagonistic or appears to be contrary to the legal position of the party who called the witness. Bombay High Court stated that legal actions must be taken against such witnesses because they are cancerous to the rule of law and the justice delivery system. The decision was taken in the case of Saraswati vs. the State of Maharashtra [Criminal Appeal no. 40 of 2015] by the bench of Hon’ble Justice Ravindra V.Ghuge and Justice B.U Debadwar.

In this case, the appellant (accused) had appeared in the High Court to quash the judgment of the Trial Court which had convicted her for the charges of murder u/s 302 of IPC and sentenced them for the imprisonment of life. The appellant was accused of murdering her own husband because of some quarrels between them for 3 acres of land. After committing the murder, the appellant herself went to the police station and gave the statement that she had murdered her husband.

The dead body of the deceased husband was found with injuries on his head, face, all over the body, and on his genitals. After the recording of evidence and the voluntary statement made by the appellant while being in police custody, the stone and the plank used to strike at the deceased were seized under the panchanama. And therefore, the trial court had convicted the accused for murder u/s 302 of IPC.

In the High Court, the appellant’s counsel contended that:-

Five out of seven witnesses had turned hostile and vital witnesses.

HC observed that a 65-year-old village lady could not have lifted an 8 kilogram stone to assault the deceased and stone and a wire was found planted in another room to which there was access from the room in which the deceased was found killed. Hence, HC found that the conclusions made by the Trial Court were unsustainable. In the post-mortem report, the doctor had declared that the deceased met a homicidal death.

While referring to the cases of State through PS Lodhi Colony, New Delhi vs. Sanjeev Nanda, (2012) 8 SCC 450 and Mallikarjun and others vs. State of Karnataka, (2019) 8 SCC 359, HC stated that the conduct of the witnesses cannot be countenanced.

HC stated that “The statements made to the police have no evidentiary value. The prosecution claims that the admission by the appellant of having murdered her husband. Though the prosecution has made such a submission, we do not find that such alleged extra-judicial confession has been proved before the Trial Court. A high degree of proof is required for proving an extra-judicial confession”.

Hence, HC gave the decision that the testimonies given in the FIR were unacceptable and stated that the benefit of doubt must be given to the accused. Therefore, the accused was acquitted from all the charges and stated that “However, it is a matter of great concern if the witnesses turn hostile for extraneous considerations and such hostile witnesses begin to believe that they are far beyond the reach of the arms of the law. This would not only be a serious ailment/ disease to the justice dispensation system but could as well be cancerous to the rule of law and the justice delivery system. Though the respect for law cannot be ensured by the threat of legal action, the time has come to initiate action against hostile witnesses in all such cases so as to send out a message loud and clear to the society at large that the witnesses becoming hostile cannot be ignored or pardoned.