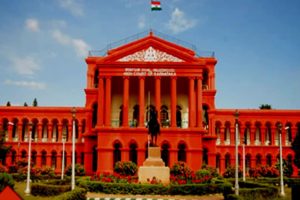 In the case of Master Balachandar Krishnan v. The State of  Karnataka (WP 8951/2020, WP 9145/2020), the Karnataka High Court on Tuesday, struck down the NLSIU amendment act 2020  resulting in a massive setback for the state government.

The court held that the state government had no power to enact the amendment act that brought in the 25% domicile reservation for admission to National Law School of India University (NLSIU). The act provided a horizontal reservation to the domiciled student. The NLSIU Amendment Act is in contrast to the parent act as it does not satisfy the twin tests of Article- 14.

The division bench headed by Justice BV Nagarathna and Ravi V Hosmani pronounced the role of the state government to be of minimal nature. He further stated that the state government had no advisory capacity in the affairs of the institution and such right vested on the NLSIU executive council to exercise its power.

“What distinguishes the Law School in question from other Law Schools is its diversity, its national or All India character with an international outlook. According to Professor N R Madhava Menon, it became the “Harvard of the East”. In fact, the Law School is the face of legal education in India internationally”, the court observed.

The NLSIU bill was worded on 19th march of this year by the Karnataka legislature, setting aside 25% of NLSIU seats of the ‘students of Karnataka’. A student- irrespective of her mother tongue- who studied Karnataka for 10 years-was eligible for the quota. Also the university increased the number of seats in the course BA LLB from 80 to 120 to accommodate its domiciled candidates.

An aspirant, a former student and the Bar Council of India had challenged the amendment. The state government in order to defend itself stated it would ensure local talent graduating from the institution is retained in the state of Karnataka. The state adjudicated that it was institutional preferences that was being permitted and rejected the ideology behind reservation.  Further adding to it, the ENTRANCE EXAM- CLAT is highly competitive in nature and the talented minds who have the capacity to practice in the courts of Karnataka, will find it tough to practice if they are not from the privileged section. The arguments were based on the facts that the students of other states, who do not know the Kannada language, will certainly not opt to practice in the state and it will only be the loss of the state and those who have the potential, will be restrained to seek admissions. The advocate stated the statistical data that out of 800 students graduating from the university, only 33 of them joined the Karnataka bench.

“Consequently, the respondent/ Law school shall follow the seat matrix issued de hors the impugned reservation for students of Karnataka, bearing in mind the increased intake capacity and the reservation made for the scheduled castes and scheduled tribes and for persons with disability.”