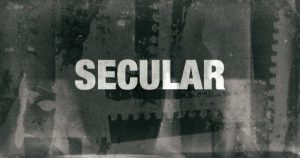 Abstract- India is a fusion of numerous religions and communities. The reason is that India is the birthplace of many religions, including Hinduism, Buddhism, Islam, Christianity, Sikhism and Jainism. This shows that India is a religious country, but secularism was adopted to avoid any confusion and difficulties in administration. Secularism is associated with never-ending debates, so it is urgent to clip the clutter and understand the meaning of these words. Ambiguity and confusions are maximum when talking about law and religion because it has become our human nature to take the discussion toward secularism.

Secularism refers to the doctrine of separation of state from religious organisations. In other words, it can also mean that a state has no preferred religion. The term was first used by the British writer George Holyoake in 1851. Indian secularism is derived from the western concept with a change. The idea of the west is an absolute non-interference policy of the state in religious matters based on the concept of “Dharma Nirapekshata”, meaning indifference of the state to religion. Due to the historical condition of India during the British reign, there were many communal riots and violent outbursts among two major religions, i.e., Hindus and Muslims. So, the Indian constitution provides for the interference of the state in religious matters if needed to protect the rights of the citizens and uphold morality. Indian philosophy of secularism is based on “Sarva Dharma Sambhava”, which means equal respect for all religions.

In the Indian constitution, the term secular was added in the preamble of the 42nd amendment in 1976. Before this amendment, nowhere in the constitution was this term explicitly mentioned. But the idea of a secular state was always upheld by the constitution makers, which can be witnessed in the right to freedom of religion which is a fundamental right under Part III.

Article 14[1] talks about general equality and states that there should be no discrimination against any individual and that all persons are treated equally before the law.

Article 15[2] enlarges the concept of Indian secularism to the greatest extent by laying down the rules against discrimination in any form by the state. Article 15 and 16 prohibits the state from discriminating against anyone based on religion, class, race, sex or place of birth. On the other hand, Article 16 (1) guarantees equal opportunities to every person irrespective of any ground.

Articles 25-28 enshrine the right to freedom of religion guaranteed to every person living within the territory of India. These articles specifically talk about the available religious freedoms and certain reasonable restrictions. Article 25[3] explicitly gives the persons in India the right to “freedom of conscience and free profession, practice and propagation of religion”. Article 26[4] states, “freedom to manage religious affairs”. Article 27[5] states, “freedom as to payment of taxes for promotion of any particular religion”. Article 28[6] speaks of “freedom as to attendance at religious instruction or religious worship in certain educational institutions”.

Article 25- This is the most crucial article and must be read from a broader perspective.

In Mohd. Hanif Quareshi v. State of Bihar[7], the petitioner, Hanif Quareshi, claimed that the slaughtering of cows on the festival of bakrid was an essential part of his Islamic religion and, therefore, state prohibition of slaughtering of cows was violative of his right to practice his religion. The court rejected his contention that the sacrifice on bakrid day was enjoyed by the koran and was an integral part of his religion. Instead, the court held that the practice was not essential to Mohammedan law and, therefore, the restriction was valid.

Article 27- This act states that the state can not collect taxes to promote any particular religion. This clearly states that no tax can be managed, but there is no such prohibition on the collection of fees. These two are separate terms. Tax is collected to develop public welfare, but the fees are collected for a particular purpose.

In Suresh Chandra Chiman Lal Shah v. Union of India[9], the court upheld the programme’s validity of the celebration of the 2500th anniversary of Mahavir, the founder of the Jain religion. The court held that the commemoration of distinguished persons, who had contributed to the development of Indian Cultural heritage, does not amount to promoting any particular religion and does not violate article 27. The court said it was done with the idea of focusing on their ideals, to kindle in the young generation an awareness of our heritage and promote international understanding.

In D.A.V. College, Bhatinda v. State of Punjab[10], the validity of section 4 of the Guru Nanak University was upheld. This section directed the state to make provisions for the study and research on the life and teachings of Guru Nanak. The court held that the act did not provide for religious instructions or promotion of any particular religion but was beneficial for the study.

Exercise of the freedom of religion is expressly subject to the alternative provisions of part 3 of the constitution (fundamental rights), public policy, morality and fitness-

The best approach to promoting secularism in a pluralistic society is to expand religious liberty instead of strictly practising state neutrality. It’s up to us to ensure the values that create the next generation include understanding and buy not only their religious traditions but also those of other religions of the country. People should identify a common framework or set of values that allows different groups to live together peacefully. The essential prerequisite is implementing social reform initiatives like a uniform civil code to create a conducive environment and establish a socio-political consensus.

‘Western dictionaries define secularism as an absence of religion, but secularism in India does not mean irreligiousness. It means profusion of religions.’ India is one of the world’s largest democracies. The Indian government and parliament have taken various precautionary measures to ensure that any form of discrimination does not affect the rights of citizens. To combat interfaith dominance, the word “secular” was added to the preamble and made part of the basic structure of the Indian constitution. So, we can conclude that India is secular and does not discriminate against its citizens based on religion. India’s population includes people of different faiths. Although India’s constitution declares the state of being utterly neutral to all religions, our society is confident, but the law tries to keep a balance in our community.