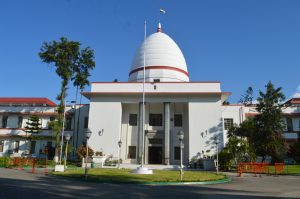 The Gauhati High Court on decided on 31st January 2022 has, while hearing a criminal appeal recently, held that the trial court has to hear a convicted person before passing a sentence on him or her as mandated u/s 235 (2) of the CrPC. It was seen in the case of Zothanpuia Council Veng VS. State of Mizoram Aizawl, Case No.  CRL.A (J)/8/2020, the matter was presided over by Honourable Mr. Justice Nelson Sailo and Honourable Mrs. Justice Marli Vankung,

The HC relied on a previous case, whereby the apex court noted that the dual purpose of Sec 235(2) CrPC is to comply with the rule of natural justice by giving an chance of hearing to the convicted person, & secondly, to assist the courts to choose the sentence to be awarded.

The provision lays down that “If the accused is convicted, the judge shall, except if he proceeds in tendering with the provisions of Sec 360, hear the accused on the question of sentence, & then pass sentence on him as per law.” As a consequence of it, “The need of hearing the accused is intended to satisfy the rule of natural justice. It is a basic need of fair play that the accused who was thereto focusing on the prosecution evidence on the question of guilt should, on being found guilty, be asked if he has anything to say or any evidence to tender on the sentence of question,” the HC held.

This is all the important since the courts are generally required to make the choice from a wide range of discretion in the matter of sentencing.

“The said provision, as the consequence, persuades a dual purpose; it persuades the rule of natural justice by giving the accused an chance of being heard on the question of sentence & at the same time helps the court to choose the sentence to be awarded,” it said.

The High Court further held that non-compliance of the mandatory provisions of sec 235(2) CrPC amounts to “bypassing” an important stage of a trial. “This deviation constitutes delinquency to an express provision of the Code as to the mode of trial. It goes to the root of the matter & the resulting illegality is of such a character that it vitiates the sentence,” it said.The HC, while observing that the trial court failed to comply with the mandatory statutory provision of providing the appellant a reasonable & adequate chance of hearing as required u/s 235 CrPC before the sentence was passed, remanded back the case to the trial court. Subsequently, the impugned judgement & order was interfered & the criminal appeal was disposed of.