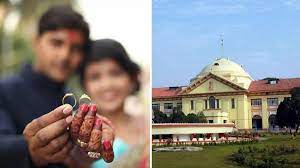 The Constitution’s Right to Life and Personal Liberty, enshrined in Article 21, gives people the inherent right to choose a life partner when they reach the age of majority. The Division Bench of Ahsanuddin Amanullah and Purnendu Singh, JJ., in Amit Raj v State of Bihar (21 June 2022) issued a recent decision, observed that the law recognizes intimate relationships between consenting majors without requiring societal recognition.As a result, the Bench decided that a girl who is over the age of majority has the right to marry and start a family.

The couple in question tied the knot in a temple and had their marriage registered with the Patna marriage officer. However, the woman’s parents disapproved of the marriage and relocated her to Gopalganj.

The petitioner requested the release of his legally wed wife, who was held by her parents, in a habeas corpus petition. The petitioner argued that he and his wife were both majors who had made the conscious decision to wed and live as husband and wife. He also said that his wife might be killed for the family’s honor.

According to Article 23 of the International Covenant on Civil and Political Rights, 1966, adopted by the United Nations General Assembly, the Bench observed that the right of men and women of marriageable age to marry and to start a family shall be recognized, and no marriage shall be entered into without the free and full consent of the intending spouses.As a result, the Bench went on to say that once a girl reaches the age of majority, she can marry anyone she wants or live with anyone she wants.

At this point, the Bench cited the Supreme Court’s decisions in Shakti Vahini v. Union of India, (2018) 7 SCC 192 and Shafin Jahan v. Asokan KM, (2018) 16 SCC 368, in which it was ruled that a person cannot be restricted in their free will to decide on matters like marriage and that societal approval of intimate personal relationships is not a basis for granting them legal recognition.Because of this, Articles 19 and 21 of the Constitution make it possible for two people to marry of their own free will without requiring the consent of their family, clan, or community.

As a result, the judge ruled that the woman was allowed to accompany the petitioner to the marital home without her parents’ objection.