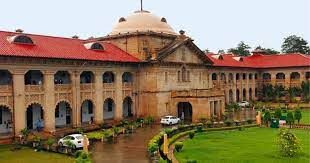 The Allahabad High Court has observed that a piece of false information regarding the education qualification of an election candidate can’t be termed a ‘corrupt practice’ within the meaning of subsection (2) or (4) of section 123 R.P. Act.

The bench further observed that the information regarding the educational qualifications of a candidate is not a vital and useful piece of information to the voter and thus, it cannot be said that any inconsistency or error in the affidavit of a candidate regarding the candidate’s educational qualification would amount to corrupt practice. This was seen in the case of Anugrah Narayan Singh v. Harsh Vardhan Bajpayee (Election Petition no. – 10 of 2017) and the case was presided over by Honourable Mr. Justice Rajbeer Singh.

In the month of February 2017, UP State elections were wherein the petitioner (Anugrah Narayan Singh/Indian National Congress) as well as the respondent (Harsh Vardhan Bajpayee/BJP) contested the election from the 262 Allahabad City North constituency and the respondent was declared elected. Challenging his elections, the petitioner filed the instant election petition under section 80/81 of the Representation of the People Act on the ground that he concealed the facts about the pending electricity dues and other liabilities and he also furnished false information regarding his educational qualifications and thus, the same amount to corrupt practice.

Taking into account several landmark rulings of the Supreme Court, the High Court observed that when the term of the disputed election has expired and thereafter, a fresh election has taken place and if the allegations made by the petitioner do not amount to any corrupt practice, then such an election petition could be dismissed. In the instant case, the Court noted that the charges against the respondent (BJP candidate) were that he had failed to disclose his liabilities as well as a correct educational qualification in his affidavit of nomination, and thus, he had interfered in the free exercise of the electoral rights of the electors.

However, the Court observed that merely because the said electrical connection is installed in the property owned by the respondent, it would not be sufficient to show that the respondent has concealed the alleged liability.

The Court also noted that no such document was shown by the petitioner to show that a recovery certificate was issued against the respondent.

“In the present case, there is no documentary evidence that the said electricity connection was in the name of the respondent or that the alleged recovery certificate was issued against the applicant. There is no such finding [in the apex Court’s decision in Kisan Shankar Kathore v. Arun Dattatray Sawant and Ors., SCC 14 (2014) 162] that concealment of electricity dues would amount to corrupt practice contemplated under section 123 of the R.P. Act. Even on the premises of the said case law the allegation regarding nondisclosure of electricity dues and loan amount would not amount to corrupt practice,” the Court further remarked.

Against this backdrop, noting that since the allegations of the corrupt practices were not proved thus, the election petition was liable to be dismissed as having been rendered infructuous, the Court dismissed the plea.