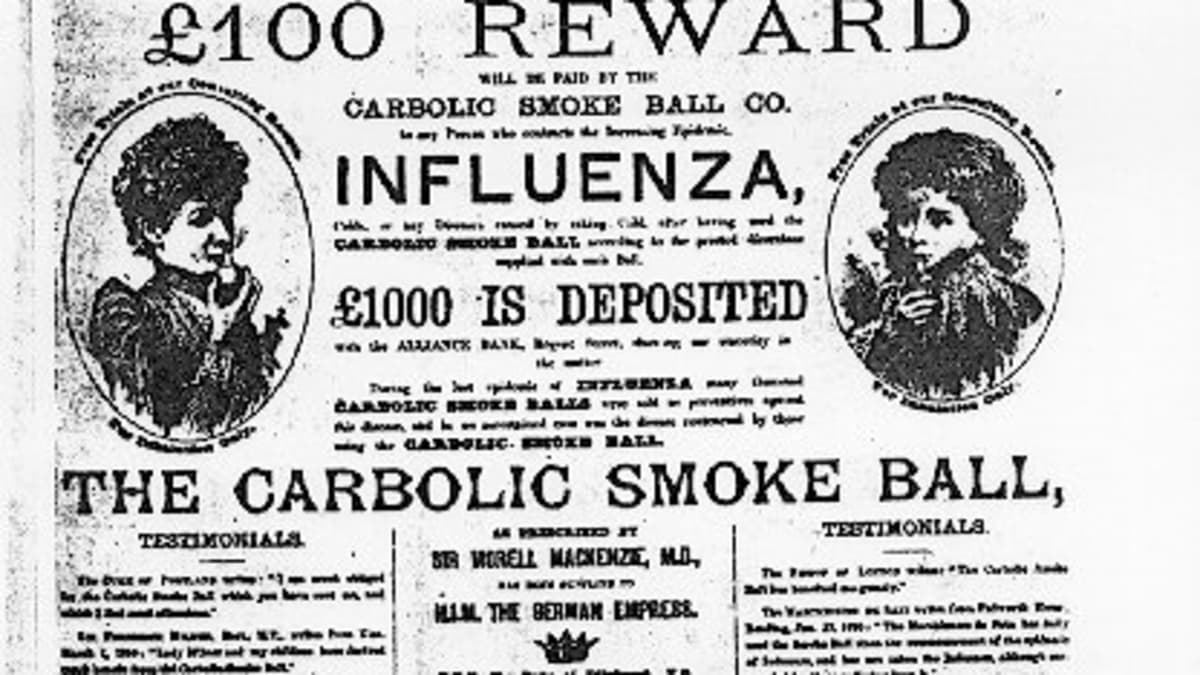 In the case of Carlill v. Carbolic Smoke Ball Co. (Court of Appeal [1892] EWCA Civ 1 ),  Justice Lindley, Justice Bowen and Justice A.L Smith observed that the main issue at hand is whether the language in Defendant’s advertisement, regarding the 100£ reward was meant to be an express promise or, rather, a sales puff, which had no meaning whatsoever. This case stands for the proposition that while sales puffery in advertisements is generally not intended to create a contract with potential product buyers, in this case it did because the Defendant elevated their language to the level of a promise, by relying on their own sincerity.

The Defendant, the Carbolic Smoke Ball Company of London (Defendant), placed an advertisement in several newspapers on November 13, 1891, stating that its product, “The Carbolic Smoke Ball”, when used three times daily, for two weeks, would prevent colds and influenza.  The makers of the smoke ball additionally offered a 100£ reward to anyone who caught influenza using their product, guaranteeing this reward by stating in their advertisement that they had deposited 1000£ in the bank as a show of their sincerity.  The Plaintiff, Lilli Carlill (Plaintiff), bought a smoke ball and used it as directed.  Several weeks after she began using the smoke ball, Plaintiff caught the flu.

Defendant’s Appeal was dismissed, Plaintiff was entitled to recover 100£.
The Court acknowledges that in the case of vague advertisements, language regarding payment of a reward is generally a puff, which carries no enforceability.  In this case, however, Defendant noted the deposit of £1000 in their advertisement, as a show of their sincerity.  Because Defendant did this, the Court found their offer to reward to be a promise, backed by their own sincerity.

The particular judgment made a huge impact on English contract law. This is the most cited case in the common law of contract mostly if the case is concerned with unilateral contracts. After this judgment the companies and agencies are more careful about what they advertise to the world at large. It lays foundation to contract law as all the essential elements are mentioned such as offer and acceptance, intention to form legal relationship etc.