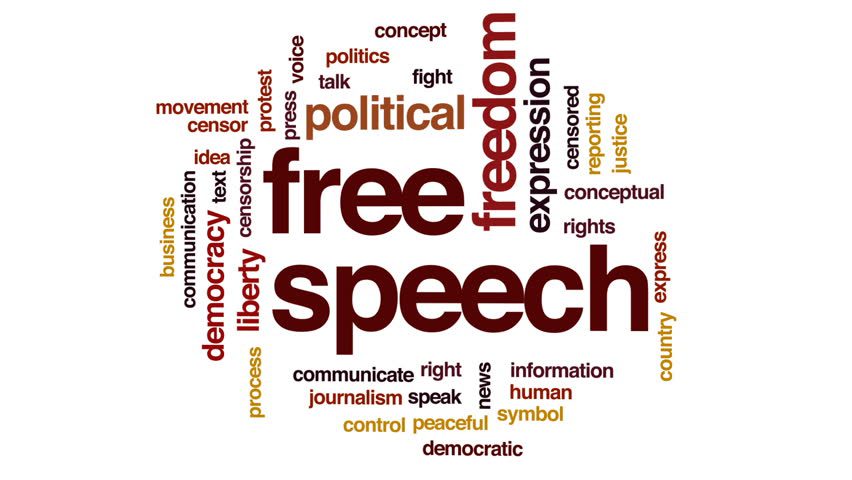 In the contemporary world, we often come across the term ‘right to freedom of speech and expression’, which is provided to us, under article 19(1)(a) (which says that all citizens shall have the right to freedom of speech and expression) of the Indian constitution, making it one of the fundamental rights conferred to Indian citizens. The right guarantees liberty to express one’s opinion, views and beliefs. One can exercise this right, and express using verbal speech, writing, printing, pictures, different art forms and other possible ways.

But with every right comes certain responsibilities, and thus it is important to make the right subject to reasonable restrictions to protect the right from its misuse. For this purpose, article 19(2) (which says that Nothing in sub-clause (a) of clause (1) shall affect the operation of any existing law, or prevent the State from making any law, in so far as such law imposes reasonable restrictions on the exercise of the right conferred by the said sub-clause in the interests of the sovereignty and integrity of India,] the security of the State, friendly relations with foreign States, public order, decency or morality, or in relation to contempt of court, defamation or incitement to an offence.) of the constitution holds authority which declares the right to freedom of speech and expression as ‘not absolute’, and subject to reasonable restrictions. It also provides with provisions to punish those who misuse the right to freedom of speech and expression.

Importance of right to freedom of speech and expression

Right to freedom of speech and expression is one of those rights which form the basis of any democracy, as it encourages free will of people, to think in a way they wish to, have a different opinion and express it, healthy criticism of the governmental policies is a better, and brings about liberty of thoughts and tolerance in society. It is an indispensable right in a democracy[1], as it allows people to be able to participate in different political, social, and economic affairs   of the country.

The freedom of press derives its roots from Article 19(1) (a) and its maintenance is the primary duty of the Court.[2] It forms the very basis  of the independence and liberty of the fourth pillar  of democracy, i.e. press (or media). It gives the right to critically analyze the government and help in shaping public opinion. In Romesh Thappar v. state of madras, Patanjali Shastri CJ observed, “Freedom of speech and that of press lay at the foundation of all democratic organizations, for without free public education, so essential for the proper functioning of the process of popular Government, is possible.”

Besides, Article 19(1)(a) grants enough liberty to an individual to express his opinions on the social, economic and political affairs, to propagate one’s own view and ideology, and for the free flow of ideas, beliefs, and thoughts and strengthens the community. Most of all, it provides us with the freedom to criticise the government, it’s policies and challenge them.[3]

Freedom of speech and expression and the following:

In Brij Bhushan v State of Delhi[4], an order issued under section 7(1) of the East Punjab safety Act, 1950, directing the editor and publisher of a newspaper to submit for scrutiny in duplicate before publication till further order all communal matters and news and views about Pakistan including photographs and cartoons. This order was struck down by the Supreme Court as unconstitutional. The hon’ble Supreme Court observed that there can be little doubt that the imposition of pre censorship on a journal is a restriction on the liberty of the press which is an essential part of the freedom of speech and expression declared by Art. 19(1)(a). In Romesh Thapar v State of Madras[5], the notification banning the entry into or circulation sale or distribution in the state of madras, or any part of it the newspaper named crossroads, published at Bombay was held invalid.

In the case of K. A. Abbas v Union of India[6], where the filmmaker was not given the  ‘U’ certificate for his film which showed the ‘tale of four cities’ in a form of documentary film, ahead of some ‘obscene’ scenes in the film. The court granted the certificate and said that sex is not always obscene and it depends on at what basis it is shown. Deciding on where the constitutionality of the Cinematograph Act was challenged, and the Supreme Court held that Cinema is different from other media and has a different impact on people and thus legitimized the censorship on cinema.

In yet another case of S. Rangarajan v P. Jagjivan Ram[7], where the film was granted ‘U’ certificate after deletion of some scenes, but the High Court had abrogated the said certificate for it would harm the social harmony ahead of some controversial scenes in the movie. Deciding on the matter, hon’ble Supreme Court set aside the HC judgement and held that it was the duty of the state to protect the freedom of speech and expression since it is the right granted against the state.

In the case of Re: Venegan Case[8], where the petitioner went to a shop with black cards and flags and shouted and asked people to not purchase anything from that shop, because apparently, it was owned by a ‘north Indian’. The Court held that the act of the petitioner was out of the ambit of the Art. 19(1)(a) because of the reasonable restrictions because he was infringing the shopkeeper’s right to do his business.

What are reasonable restrictions?

The Constitution allows imposition of reasonable restrictions on the right to freedom of speech and expression, by the State “in the interest of” or “in relation to” the public at large. This includes no such use of any words that challenge and intend to disturb the sovereignty and integrity of the country and poses any threat to the security and safety of the state and people, both from external and internal forces. In addition to that no person can make use of words which intend to defame and abuse some other person, and it is required to maintain a certain level of decency and morality while expressing oneself with any means of expression. Moreover, Freedom of speech and expression cannot act as a permit or license to incite an offence i.e. any act or omission that is made punishable by law. Also, freedom of speech cannot be admitted as a defence to contempt of court and any such use of words which do, or intend to do, to scandalize the authority and dignity of the Judiciary, are restricted under article 19(2) of the Indian constitution.

Some recent cases related with freedom of speech and expressions

In the recent case of Re: Prashant Bhushan and Anr.[11], where a supreme court Advocate Prashant Bhushan was charged with Criminal Contempt of Court by a suo moto cognisance of the apex court itself. The said advocate had posted two tweets on twitter, one of which commented on photo of CJI S A Bobde riding a fancy bike, and another which was a comment on the role of four former CJIs in the last 6 years. While there were other issues related to the case, one of them was whether the defence of right under article 19(1)(a) could be taken or not. The Supreme Court deciding on the matter on 31th August 2020, in its judgement observed  “No doubt, one is free to form an opinion and make fair criticism but if such an opinion is scandalous and malicious, the public expression of the same would also be at the risk of the contempt jurisdiction.”

In another case Arnab Ranjan Goswami v. Union of India and Ors.[12], where the petitioner, who is a famous TV journalist filed a writ petition, under article 32 of the constitution, in the supreme court, against number of FIRs registered against him, which was infringement of his fundamental right to freedom of speech and expression and that of liberty of press conferred under article 19(1)(a) of the constitution. The FIRs were registered after the journalist questioned the silence of Congress party’s president Mrs. Sonia Gandhi over the Lynching of two sages in Palghar in his debate show. The supreme court, in its judgement, while deciding the matter in favour of the petitioner observed that, “The exercise of journalistic freedom lies   at the core of speech and expression protected by Article 19(1)(a). The petitioner is a media journalist. The airing of views on television shows which he hosts is in the exercise of his fundamental right to speech and expression under Article 19(1)(a).”

The Constitution of India assures several fundamental rights to a citizen of India. One of these rights conferred is right to Freedom of Speech and Expression under Article 19(1)(a) of the Constitution. Right to freedom of speech and expression enables a person to express his opinions freely with certain reasonable restrictions. It is one of those rights which are indispensable in a democracy and is guaranteed to all the citizens of India under Article 19(1)(a) of the Indian Constitution. It enshrines the principle of ‘liberty of thought and expression’ given in the Preamble.

The right to freedom of Speech and Expression gives the Indian Citizens the right to express their opinions and beliefs without any fear, by modes of words, written or spoken, pictures, or any other communicable or visual representation like gestures or signs. It also includes the liberty to propagate one’s own views as well as the right to  publish  the  views  of  other people. However, the right to speech and expression is not an absolute right and reasonable restrictions may be imposed by the State under Article 19(2) of the Constitution.

Where Indian citizens have right to freedom of press, cinema, hold demonstrations and perform activities so as to express themselves, all these are subject to restrictions based upon sovereignty and integrity of the country, security and safety of people, defamation and abuse, decency and morality, perform contempt of court.