The Odisha High court passed a judgment on 29.06.2022 in which it subdued the judgment for the appeal. This was seen in the case of M/S. Atlas Pvc Pipes Limited vs State Of Odisha & Others CRLA No.29 of 2003 and this case was presided over by JUSTICE KRUSHNA RAM MOHAPATRA AND JUSTICE MURAHARI SRI RAMAN. A Division Bench of Krushna Ram Mohapatra and Murahari Sri Raman, JJ. In a case where due to pandemic certified copy was not available on time while filing appeal , enclosure of impugned order copy available on GST portal as opposed to procedural requirement of certified copy must not result in compromising the matter to be decided on merits.

The petitioners contended the hyper-technical approach of the Appellate Authority left it remediless and that the Authority should have been more practical in its approach, by taking into consideration the pandemic situation.

While the defendants claimed that the Authority had sufficiently followed the principles of natural justice as it gave the petitioners the opportunity to adhere to the impugned procedure by specifying dates for compliance. Reliance was placed on the judgment, In Re: Cognizance for Extension of Limitation.

The present appeal arises from the rejection of the petitioner’s prior appeal against the order of the Joint Commissioner of CT & GST, dated 23-05-2022. The petitioner, Atlas PVC Pipes Ltd., claims to have filed an appeal against an order of the CT & GST Officer for a rise in demand, and it is further asserted that apart from adhering to the procedure for filing of the appeal, the petitioner could not submit the certified copy of the impugned order along with the appeal memo in time.

The Court held that the petitioner was entitled to the benefit of the exclusion of 7-day limitation as per Rule 108(3) of the OGST Rules, 2017. The Bench further made the observation that a mere delay in attaching a certified copy of the impugned order appealed against, should be treated a mere technical defect and the merit of the matter must not be disregarded in this respect. The Court allowed the appeal accordingly and directed the petitioner to appear before the Joint Commissioner of State Tax (Appeal),so that the Appellate Authority may proceed to decide the present appeal on the basis of its merits. 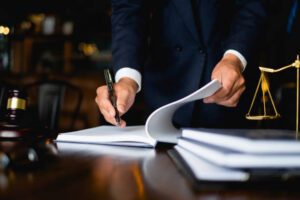