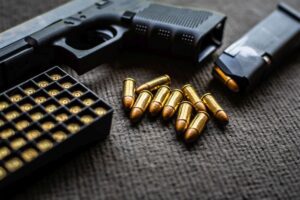 The Gujarat High Court on 27th June 2022 ruled that reasons for refusing a firearm licence under the Arms Act must have a nexus and be in context with the provisions mentioned in the act and the licence cannot be revoked for extraneous reasons, through the single bench of Justice A. S. Supehia in the case of Khanji Mohammad (Special Civil Application No. 15757 of 2021).

The petitioner has sought the court’s permission to quash and set aside the respondent’s order dated 9.09.021, which revoked the petitioner’s firearms licence.

According to the facts of the case, the Petitioner held a firearm licence and sought its renewal by the Arms Act, but the application was rejected and his licence was revoked, even though the fact that he has access to a telephone and may call for police protection as and when required.

The Petitioner referred to Sections 13 (Grant of Licenses) and 14 (Refusal of licenses) of the Act and contended that the grounds given by the authorities are not mentioned in the Act. On contrary, the AGP argued that the Petitioner can challenge the impugned order by an appeal to the Secretary of the Home Department.

The Bench noted that the Petitioner’s holding of the licence in 1997 was not challenged. Following a perusal of Section 17(3) of the Act, the Bench concluded that the authority had not even “remotely thought fit” to examine the issue by Sec 17(3) conditions.

It further stated that the reasons for refusing a licence should be related to and relevant to the terms of the Act and that the licence cannot be revoked for irrelevant reasons. As a result, the impugned order dated 29.09.2021 issued by the respondent authority deserved to be quashed and set aside since it was issued for completely irrelevant reasons that violated the provisions of the act.

Accordingly, the matter was remitted back for reconsideration in accordance with the law.