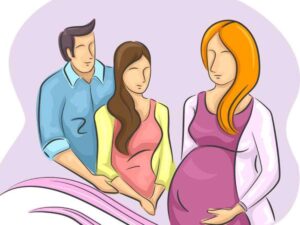 The Gujarat High Court on 27th June 2022 ruled that the Surrogacy Regulation Act of 2021 does not include any provision requiring the surrogate mother to keep custody of a new-born child for a specified amount of time to breastfeed, through the division bench of Justice Vipul M. Pancholi and Justice Sandee N. Bhatt in the case of ENA w/o Ashish Jain vs State of Gujarat (Special Criminal Application No. 6490 of 2022).

The petitioners in this case were a married couple who wanted to become parents through surrogacy. As a result, they reached an agreement with a woman who consented to become a surrogate mother for them. It was decided that custody of the child would be given to the petitioners, i.e., the intended parents, immediately after delivery. The surrogate mother was arrested by police before the due date of the delivery due to an FIR registered against her. She thereafter gave birth to a baby girl.

While shedding light on the legal provisions of the matter, the Assistant Public Prosecutor stated that the Surrogacy Regulation Act, 2021 had no provision mandating the surrogate mother to keep custody of the child for a specific duration for purpose of breastfeeding. However, the APP stated that there was a reference to the importance of breastfeeding the child for the first 6 months from the date of birth in the National Guidelines on Infant and Young Child Feeding issued by the Ministry of Human Resource Development Department of Women and Child Development (Food and Nutrition Board), Government of India.

The court relied on Clause 1(J), Clause 1(O), Clause 6(B), Section 2(zd), and Section 8 Surrogacy Regulation Act, 2021, as well as the agreement entered into by the parties.  The court also relied on the case of Navjot Singh Sidhu vs the State of Punjab and Others [(2007) 2 SCC 574], in which the Supreme Court held that courts must interpret the law as it stands, not on considerations of the perceived morality.

Thus, in the absence of any provision in the Surrogacy Regulation Act, 2021 mandating the surrogate mother to retain custody of the child for a specific period for breastfeeding, the Court held that custody of the corpus, i.e., newly born child, was required to be handed over to the intended parents/petitioners.