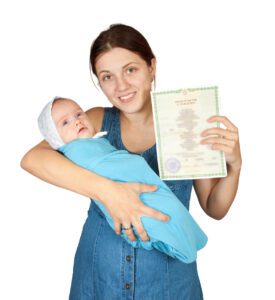 Happy mother with baby and with certificate of birth. Isolated over white background

The Gujarat High Court on 15th June 2022 ruled that the registrar was not obliged to obtain the biological father’s consent, nor was he have to be arraigned as a party to the writ petition, because the adoption deed was not in question, through the single bench of Justice A. S. Supehia in the case of Chhayaben @ Hetalben Atulbhai Asodariya vs The Registrar of Birth and Death/ Chief Officer (Special Civil Application No. 15757 of 2021).

The petitioners subsequently sought that the respondent authorities replace/mention the name of Petitioner No. 2 as the minor’s biological father on his birth certificate. The respondent rejected this application for correction, requesting that the petitioners present a local court decree regarding the adoption.

According to Section 16 of the Hindu Adoptions and Maintenance Act of 1956 (hereafter “the Adoptions Act”), only registered adoption is mandatory. He also referred to circulars published by the Ministry of Home Affairs on 15.05.2015 and 31.01.2018, which indicated that just a registered adoption deed is required and that the necessity of a decree of adoption from the court concerned has been discontinued. It was further pointed out that the circulars upon which the impugned order was based had now been cancelled by a subsequent order issued by the state authority.

The respondent’s counsel openly admitted that the circulars upon which the impugned order was based have already been quashed. According to Section 9 of the Adoptions Act, the Registrar should check whether the Adoption Deed is valid or not, and so the biological father must be named a party respondent in the writ petition in order to determine if the petitioners’ adoption deed is legal or valid.

The Court determined that the cancellation of the orders upon which the respondent’s judgement was based was sufficient grounds for quashing the impugned order. It then referred to Section 15 of the Registration of Births and Deaths Act, 1969, and stated that the Registrar can correct an entry already made in the Birth Register if the same is accepted, and such correction should legitimately take within its sweep the correction of entries rightfully made because it is the correction of the child’s name at the request of the parents of wards.

The Court thereafter referred to the case of Tushar Kanaiyalal Vyas (Thru. POA) vs. State of Gujarat & Ors. [Spl. Civil Application No. 7864 of 2016], in which a presumption was drawn in favour of the petitioners under Section 16 of the Adoptions Act when the decree of divorce between the biological parents provided that custody of their minor child would be with the wife and the registered deed of adoption was not challenged. In light of the aforementioned, the Court held that the stage of obtaining consent, as defined in section 9 of the Adoptions Act, cannot be invoked at the stage of incorporating the father’s name (adoptive) in the son’s birth record, after the divorce and adoption deeds have been registered and have not been questioned. Thus, neither the biological father, i.e., the former husband of petitioner no.1 nor the Registrar is needed to make him a party to the writ proceedings to order to get his consent.

The Court directed the respondent authority to correct the father’s name and insert Petitioner No. 2’s name in the minor’s birth certificate, and issue a new certificate within one month of the order’s receipt.

Accordingly, the writ petition was allowed.