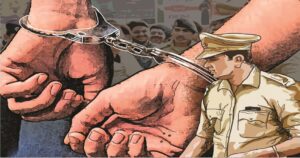 The Gujarat High Court on 22nd July 2022 reiterated that if a preventive detention order is made on ambiguous, irrelevant grounds, it may be challenged at the pre-execution stage, or before the accused is detained, through the division bench of Justice S.H. Vora and Justice Rajendra M. Sareem in the case of Anilsinh Laghubha Jadeja vs State of Gujarat (Spl. Civil Application No. 11445 of 2022).

According to the facts of the present case, the Petitioner had filed the present application after speculating that he was being detained under the Prevention of Anti-Social Activities Act (PASA Act) under the pretext of FIRs for offences punishable under Sections 65AE, 81, and 98(2) of the Prohibition Act. He argued that his alleged conduct had no negative effects on public order.

On the other hand, the AGP argued that the petition was at a pre-execution stage without surrendering. In order to challenge the detention, he could only use one of the five defences listed in Additional Secretary to the Government of India and others vs. Smt. Alka Subhash Gadia [1992 Supp. (1) SCC 496], which are listed below:

The Petitioner contended that these grounds were only illustrative and not exhaustive.

The Bench noted that, while neither the possibility of commencing criminal proceedings nor the pending status of such proceedings is a bar to preventive detention, the authorities must consider the above-mentioned factors before issuing the detention order. The Court refused to call the Petitioner a “bootlegger” and invalidated the State authorities’ detention order, stating that the Petitioner’s imprisonment was not required to maintain “public order.”

The division bench held that the authorities had failed to convince the court as to why the Accused’s preventive detention was required when ordinary criminal procedures would suffice.

Concerning the Court’s interference at the pre-execution stage, the High Court noted that the offences had been filed against the Petitioner, which was not controverted by the authorities. The arrest of the Petitioner came within the 3rd and 4th grounds as mentioned in the Alka Subhash Gadia case since it was based on ‘vague, extraneous, and irrelevant grounds.’