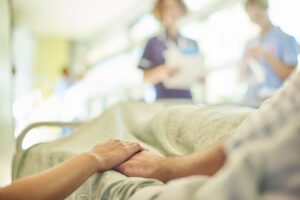 The Gujarat High Court on 19th July 2022 ruled that an “oral dying declaration” given by the deceased and not contradicted by the defence during cross-examination is admissible as evidence, through the single bench of Justice Ashokkumar C. Joshi in the case of State of Gujarat vs Laxmanbhai @ Lakhabhai Pratapbhai Thakor & 2 Other(s) (Criminal Appeal No. 575 of 2008).

The appellate, the State of Gujarat, filed an appeal under Section 378(1)(3) of the Code of Criminal Procedure, 1973 (hereinafter “the Code”), and Criminal Revision Application No. 450 of 2007 was filed by the applicant – original complainant under Section 401 of the Code, challenging the learned Sessions Judge’s judgement and order dated 10.07.2007, in which the respondents-original accused were acquitted.

The marriage of deceased Ramilaben, the sister of the original complainant – Dhanabhai Chaturbhai, was solemnised with accused No.1 – Laxmanji @ Lakhabhai Pratapbhai Thakor.  They had one child out of wedlock, Rahul, who was one and a half years old at the time. After her marriage, the victim, deceased Ramilabe, lived in her matrimonial house with her joint family. According to the FIR filed by the complainant, almost 3 years after his sister’s marriage he received telephone information that his sister had suffered burn injuries in her matrimonial home and was being admitted to the hospital. He alleged that he stopped the car and found his sister in the middle seat, burned. He further stated that she informed him that she had set herself on fire as a consequence of dowry-related harassment from her husband and in-laws.

While acquitting the accused, the trial court completely dismissed the complainant’s statements. The APP argued in the appeal that there is a prejudice against the in-laws if a married woman commits suicide within 7 years of marriage and had made charges of cruelty shortly before that. The Bench observed that the couple had not been living together for the past 1.5 years due to severe physical and emotional suffering. The victim’s complainant (sister) confirmed that the victim admitted to being forced to pay Rs.10,000 in dowry. The constant harassment had driven her to commit suicide in the way described above.

In the present case, the high court said that the victim’s oral dying declaration was not controverted by the defence and so held it acceptable. It also rejected the claim that the PWs were relatives of the witness and hence not impartial. It cited Seeman alias Veeranam v. State by Inspector of Police [AIR 2005 SC 2503], in which the Supreme Court ruled that just because a witness was a relative did not mean his statement should be rejected in its entirety.

The bench further stated that Section 113A of the Evidence Act would be applicable in this case. Furthermore, the victim was conscious and able to communicate when the Complainant first met her on the way to the hospital. She had made explicit statements of cruelty against the Accused. the Prosecution’s case was corroborated by an independent witness, the family’s driver. In regards to minor contradictions, the High Court reiterated that regular discrepancies in witness depositions were certain to arise owing to lapses in time, mental disposition, or mistakes in recollection.

As a result of the importance of a reliable oral dying declaration, the High Court sentenced the victim’s husband to harsh imprisonment for 5 years under Section 306 IPC. Both the father-in-law and mother-in-law were sentenced to one year of simple imprisonment.

Accordingly, the state’s appeal was allowed and the Sessions Court’s order was reversed.