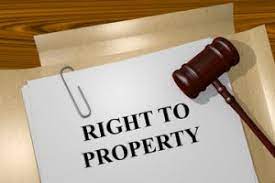 The Calcutta High Court has stated that the State cannot escape its duty to pay compensation for land acquisition only on the basis of delay because the right to property is a valuable right guaranteed by Section 300A of the Indian Constitution.

The appellants in Ajet Ali Baidya v. State of West Bengal (M.A.T. No. 202 of 2022) approached the court in 2005, so any delay in this case is not fatal enough to frustrate a claim for compensation that is guaranteed by Article 300A of the Indian Constitution, according to a bench made up of Honourable Justice Arijit Banerjee and Honourable Justice Kausik Chanda.

The Court was making a judgement regarding an appeal filed in response to a single judge bench’s decision to dismiss the appellants’ writ petition. In order to be given ownership of their respective plots of property, the appellant had petitioned for a directive that the relevant land acquisition case be declared to have expired.

Alternately, it was requested that the respondent authorities be instructed to seize the appellants’ land and compensate them in accordance with the Land Acquisition Act of 1894.

The Bench took note of the complaint and stated, “We are, however, of the opinion that there might be some delay on the part of the petitioners in approaching this Court, but since the right to property is a valuable right flowing from Article 300A of the Constitution of India, the State cannot deny its obligation to compensate the petitioners merely on the ground of delay.”

The Court also noted that the State had acknowledged in its evidence that the appellants are the “patta” holders of the State’s vested land and that their own land was purchased.

Furthermore, it was stated that it makes no difference that the disputed lands were taken into possession in 1993 without any sort of acquisition because the acquisition process was only restarted in 1999 thanks to the issuance of a notice under Section 9(3A) of the Land Acquisition Act, 1894, as amended by the West Bengal State Amendment Act.

The Supreme Court’s ruling in Sukh Dutt Ratra v. State of Himachal Pradesh, in which the Apex Court ordered to pay compensation to the appellants who filed the writ suit against the State after 38 years, was also cited.

The Court concluded as a result: “We are of the opinion that justice will be sub-served if the State is directed to pay compensation to the appellants as has been paid to the similarly situated persons whose lands have been acquired and who have received compensation following the L.A. Case No. 4/34 of 1999-2000.”

Therefore, the Court instructed the State to investigate whether the appellants had a stake in the disputed lands and whether they have been purchased and used for the Calcutta Leather Complex project.

The State must pay compensation to the appellants and all statutory benefits within two months after the day this order was communicated, treating it as a case of deemed acquisition, if the responses are determined to be in the affirmative.