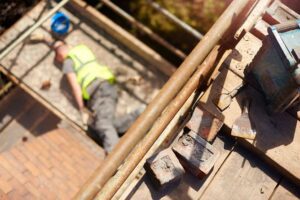 The Karnataka High Court on 1st June 2022 quashed the criminal proceedings against an architect and stated that interpreting Section 304A of the IPC to establish that a person who designed the house is accountable for the death of a worker while working under a contractor would be extreme, through the single bench of Justice M Nagaprasanna in the case of Vishwas V. vs State of Karnataka (Writ Petition No. 5609 of 2022).

The petitioner in the present case filed a writ petition under Articles 226 and 227 of the Constitution of India read along with Section 482 of the Cr. P. C. and prayed for quashing of the entire proceedings in C.C.NO.28916/2021 in the court of Chief Metropolitan Magistrate, Bengaluru.

According to the facts of the present case, the petitioner is a professional Architect Engineer and had designed the house for one Chandrashekar, the owner of the residential site. The petitioner took the dimensions of the property and the owner’s requirements for drawing up a design after personally inspecting the property. The site owner entrusted the construction of the building and the plan of action for such construction to a contractor.

On October 10, 2020, an employee named Mukesh who worked for the contractor died as a result of electrocution while working on the site. The petitioner stated that he heard of the incident only after attending the house warming ceremony at the owner’s invitation in February 2021. On February 17, 2022, the petitioner claims to have discovered that the Police had registered a crime against him in connection with the death of a construction worker. The police had only filed a chargesheet against the petitioner under Section 304A r/w 34 of the IPC, leaving out the owner.

It was argued that the allegation of an offence punishable under Section 304A IPC could not be laid against the petitioner because the petitioner was only an architect who designed the house and it was the responsibility of the contractor or the owner of the property to have taken such precautions to prevent such mishap, i.e. the death of the employee. The complainant, on the other hand, said that the petitioner’s design was the cause of the worker’s death and that, now that the chargesheet has been filed, it was up to the petitioner, to tell the truth.

Furthermore, the bench relied on a Supreme Court judgement in Ambalal D.Bhatt v. State Of Gujarat [(1972) 3 SCC 525], which held that the petitioner cannot be hauled into proceedings for offences punishable under Section 304A of the IPC because he was neither responsible for construction nor present at the site of construction, nor even had any proximity to the act that was either rash or negligent.

Accordingly, the writ petition was allowed.