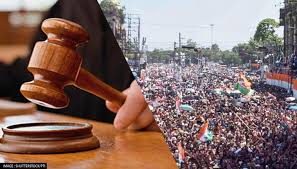 While thousands of people are expected to attend the Trinamool Congress’ (TMC) Martyrs’ Day rally in Kolkata, the Calcutta High Court has ordered the State Police to ensure that peace, law, and order are maintained.

In the case of Nabendu Kumar Bandyopadhyay v. State of West Bengal and Others (WPA(P) 326 of 2022), the bench of Honourable Chief Justice Prakash Shrivastava and Honourable Justice Rajarshi Bharadwaj did make it clear that it did not intend to analyse the politically motivated allegation in the petition. As a result, the Court did not take into consideration the oral arguments made by the petitioner in that regard.

The bench took this decision in response to a Public Interest Litigation (PIL) petition filed by one Nabendu Kumar Bandyopadhyay, who claimed that because of the purported provocative remark made by the State’s Chief Minister, there was fear of violence during the demonstration.

In essence, the Court was handling a number of Public Interest Litigation (PIL) petitions in the Niladri Saha (supra) case that asked for the deployment of central paramilitary forces in West Bengal in response to protests against offensive remarks made against Prophet Mohammed by former BJP spokespersons Nupur Sharma and Naveen Kumar Jindal.

In that instance, the Court had instructed the State’s authorities to make sure that no unfavourable incident occurred and had further instructed the State to request assistance from central forces in the event that they were unable to maintain control of the situation.

The court, however, refrained from issuing any new judgments and instead instructed the State authorities to abide by the rulings it made in the case of Niladri Saha vs. The State of West Bengal and Others on June 13 and June 15, 2022.

The petitioner (Nabendu Kumar Bandyopadhyay) told the court that Mamata Banerjee, the chief minister of the state, had made a statement encouraging her party members to use violence against the petitioner’s political party members (BJP).

The petitioner further argued that there was widespread fear of violence because there had been attempts to incite a specific community to use violence against the supporters of the petitioner’s political party.

The Court began by noting that it was undisputed that a rally was planned for July 21, 2022, in honour of Martyrs Day (Shahid Divas). The Court further remarked that there was no dispute on CM Banerjee’s statement regarding the Jihad against a certain political party.

According to this interpretation of the situation, the Court noted that its only concern was the upkeep of tranquilly, law, and order during the gathering, the rally, and its aftereffects. As a result, the Court granted the request for a temporary injunction to keep the peace and uphold the law and issued the aforementioned order.