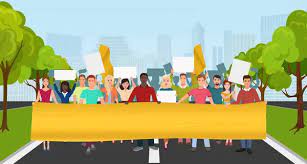 The Primary Teachers’ Welfare Association was granted permission by the Calcutta High Court on Thursday to hold a nonviolent protest march from Raja Subodh Mullick Square Park to Rani Rashmoni Avenue in Kolkata on June 11.

However, in the case of Usthi United Primary Teachers Welfare Association & Anr v. The State of West Bengal & Ors (WPA 10043 of 2022), a single judge bench presided over by Honourable Justice Shampa Sarkar imposed a number of conditions and further emphasized that the police authorities shall be free to ensure that no breach of peace occurs and law and order is maintained.

The current claim was made on the grounds that the Utshi United Primary Teachers Welfare Association was denied permission by the Commissioner of Police in Kolkata to conduct a peaceful procession on June 11, 2022, from Raja Subodh Mullick Square Park to Rani Rashmoni Avenue.

On June 11, 2022, between noon and 4 p.m., the association planned to hold a protest rally with about 3,000 participants, five vehicles, and twenty loudspeakers. As a result, the Kolkata Police Commissioner was asked for permission. However, it was claimed that the request, which was made on May 31, 2022, went unanswered, leading to the filing of the current complaint.

Senior attorney Amitesh Banerjee, who was representing the State during the proceedings, informed the Court that neither the Kolkata Police officer nor the Commissioner of Police had ever objected to peaceful marches. It was further argued that the police authority must be permitted to take preventive measures in the event that it is discovered that the protesters block traffic, damage any property, or engage in public nuisance during such a rally.

The court added that the petitioner wanted a peaceful rally with a minimal amount of loudspeakers and vehicles and that the police authorities had not objected to such a rally. The court has imposed the following conditions: