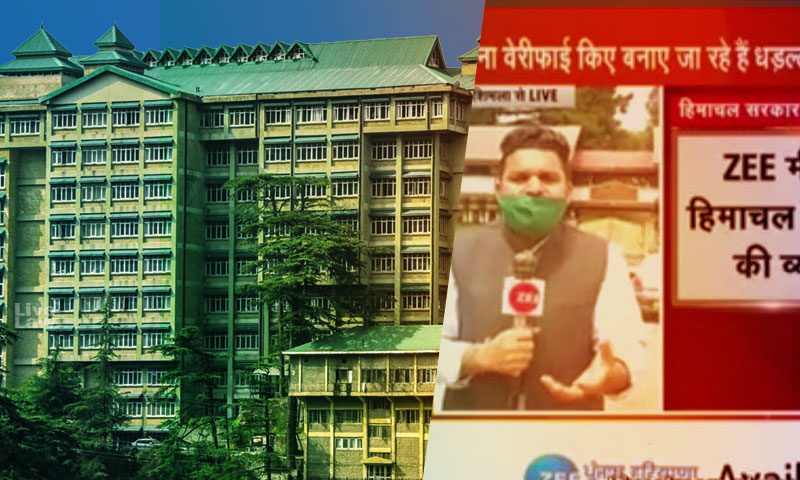 No coercive action taken against a journalist at present, who had petitioned the court to dismiss the criminal proceedings against him., is upheld by the High Court of Himachal Pradesh through the learned Judge JUSTICE VIVEK SINGH TAKHUR, in the case of Aman Kumar Bhardwaj vs State of Himachal Pradesh, (Cr.MMO No. 246 of 2021).

Zee Media employee and petitioner Aman Bharadwaj went to the High Court to have a FIR filed against him in Shimla under the IPC’s Sections 419 (Punishment for cheating by personation), 468 (Forgery for the purpose of cheating), and 471 (Using as genuine a forged document or electronic record) quashed and set aside, The Hindu reported. The State government issued guidelines on April 25 requiring registration on the e-pass site as a means of tracking inter-State travel to Himachal Pradesh. It announced on May 5 that, beginning on May 7, a “corona curfew” will be in effect. A requirement of the rules was registering with the Himachal Pradesh government’s e-pass site before any out-of-state travel could be undertaken. The petitioner claimed that on May 7 he published the results of a “reality check” he had performed on the online site for applying for an electronic passport.

Without providing a good justification, “the petitioner filled out the portal registration form for issuances of two e-passes for entering Himachal Pradesh. Both Amitabh Bachchan and Donald Trump’s names were used in the registration. Petitioner knowingly provided his own verification information (Aadhaar card and phone numbers) for review. Additionally, he listed two arbitrary car registrations. It came as a surprise to him when the passes were automatically created. The petition claimed that this proved the passes were being provided automatically, without anybody checking the paperwork. After the story aired on May 7th, the Director of IT filed a complaint at the Shimla (east) police station, leading to the registration of a FIR against him.

While the State government had virtually sealed its borders due to an increase in the number of COVID-19 cases leading to a very high mortality rate, the petitioner undertook the entire process [investigation] to establish the fact that the registration on the e-pass portal was being done in a mechanical manner without proper verification of the documents so uploaded by any competent authority. Registration was undertaken in good faith with the goal of exposing any flaws in the system that may be used to harm the public, according to the appeal.

The petitioner was allegedly harassed despite his cooperation with the enquiry. There were three separate instances when he was summoned to the police station, and each time he showed up. The petitioner’s phone and WiFi router were taken by the authorities.

Even though the petitioner is not specifically named in the FIR, it is abundantly evident from the specifics of the complaint and the disclosure statement that the petitioner is being held responsible for the creation of the passes. There has been an attempt to stifle journalistic freedom in the Indian state of Himachal Pradesh, as evidenced by the filing of this FIR.