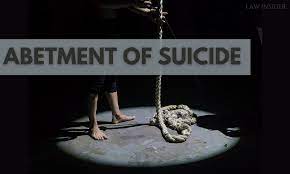 Facts of the case: This was the First bail application under Section 439 of Cr.P.C filed by the applicant for grant of bail.  With respect to the missing person report  given at the Police Station, a dead body was found at Navghar, Gwarighat, Jabalpur. During investigation it was found that the deceased as well as the applicant were having love affair and thereafter, the girl had committed suicide. The crime was registered under Section 306 of IPC against the applicant.

It was submitted that even the statements given prior to death that she was committing suicide because she was tired of living and there was no force or abetment being given by the applicant or her family members including her parents. Therefore, no case was made out against the applicant. It is further submitted that there is nothing on record to show that offense under Section 306 of IPC is made out because there are no ingredients of 107 of IPC. To establish the ingredient of Section 306 of IPC, the ingredients of Section 107 of IPC i.e abetment to suicide are must and are determining factor. The essence of abetment lies in instigating a person to do a thing or the intentional doing of that thing by an act or illegal. Instigation is to goad, urge forward, provoke, incite or encourage to do “an act”. The aforesaid aspects are missing were the present case, therefore, no offense under Section 306 of IPC is made out.

Judgment: The court held that the basic ingredient for offense under Section 306 of IPC is fulfillment of the conditions mentioned under Section 107 of IPC. Where the accused by his acts or by a continued course of conduct creates such circumstances that the deceased was left with no other option except to commit suicide, an instigation may be inferred.

Each individual’s suicidality pattern depends on his inner subjective experience of mental pain, fear and loss of self-respect. Each of these factors are crucial and exacerbating contributors to an individual’s vulnerability to end his own life, which may either be an attempt for self- protection or an escapism from intolerable self. Considering the overall facts and circumstances of the case the bail application was allowed, subject to verification of the fact that applicant is a first offender.