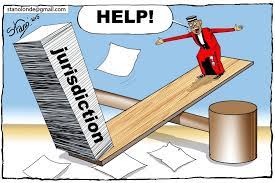 This particular decision is upheld by the High Court of Telangana through the learned bench led by the Division Bench of CHIEF JUSTICE RAGHVENDRA SINGH CHAUHAN and JUSTICE VIJAYSEN REDDY in the case of Radhika Anil Upadhyaya v. Principal Secy., Home Department ( WRIT PETITION Nos. 19725 AND 19726 OF 2020).

Petitioner has filed the habeas corpus writ petitions on behalf of her husband and has prayed that he should be set at liberty. Detenu is the Chief Executive Officer of Trillion Capital (P) Ltd., Mumbai and is also an Agent/Relationship Manager of the stockbroking firms — Manoj Javeri Stock Broking (P) Ltd. and Conard Securities (P) Ltd. Mumbai. Detenu ad the directors of the said firms assured the complainant that he would receive a high rate of returns over his investment, on believing the assurance of the detenu, the complainant along with his family members and others opened Demat Accounts with different client codes.

On investigation, it was found that the amounts invested by the victims, including the complainant were diverted into personal accounts of the detenu and other co-accused instead of investing in share market. Later it was found that Javeri Stock Broking was declared as a defaulter by SEBI. The detenu, claiming to be an Agent/Relationship Manager of the above-mentioned companies, had induced hundreds of clients/investors to open share trading accounts with Manoj Javeri Stock Broking Private Limited, by sending fabricated trade statements through Trillion Capital and contract notes.

Later on, he, along with other accused, diverted the funds and siphoned off the money of innocent investors. Respondent 4 in view of the above arrested the detenu as Sahara Airport, Mumbai and brought him to Hyderabad. Detenue was remanded to judicial custody.

Hence the writ petitions have been filed.

Supreme Court’s decision in Rupali Devi v. State of U.P., was referred which dealt with the inter-relationship between the three provisions mentioned, i.e. Sections 177, 178 and 179 of Criminal Procedure Code, 1973.

Though Sections 178 and 179 CrPC are exceptions to the ordinary rule, merely by being “exception” they do not lose their legal relevance. In view of the above, Court observed that,

Hence, if the consequences of an offence are suffered at a different place, than the place where the offence had occurred, even then the Court where the consequences are suffered would certainly have the jurisdiction to try the case. Further, the Court also added that since many times, an offence may be committed in different areas, since many times, a given offence may have different steps that are required to be taken, Section 178 CrPC deals with such a situation.

Court relied on the decision of Supreme Court in Manubhai Ratilal Patel, stated that while carrying out the remand duty, the Magistrate is not required to hold a mini-trial

In the present case, the FIR was lodged in Hyderabad, which clearly alleged the commission of a cognizable offence. Since part of the cause of action had arisen in Hyderabad, the police force of Telangana was justified in arresting the detenu who was residing in Mumbai, and in bringing him to the State of Telangana for further investigation. Magistrate had remanded the detenu to judicial custody by exercising the power bestowed upon the Magisterial Court.

Hence, judicial custody was a legal one. No merit was found in the petitions.