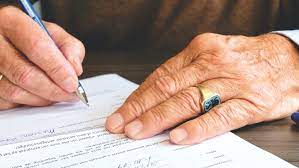 This particular decision is upheld by the High Court of Andhra Pradesh through the learned bench led by HONOURABLE MR. JUSTICE M. SATYANARAYANA MURTHY in the case of Mangipudi Nagaraju v. State of Andhra Pradesh (WRIT PETITION No.1399 of 2021).

Murthy and Sodemma were husband and wife with no children. Murthy was the absolute owner of agricultural land and a house, he had alienated his entire property to his wife during his lifetime. Sodemma who was the maternal aunt of the petitioner, bequeathed the said property to him as he had taken care of their welfare at the old age. Therefore, petitioner became the absolute owner and possessor of the said property as per the registered Will deed executed by Sodemma. Respondent 15, son of younger brother of Murthy with a mala fide intention to become the owner of Murthy’s property hatched a plan and fabricated an adoption deed to claim that Murthy and Sodemma adopted respondent 14 and got the signature of Murthy and Sodemma on the said fabricated deed by fraud and misrepresentation.

Further, it was submitted that during the pendency of both the said suits, respondent 17, the then Minister for Animal Husbandry alleged to have purchased the property. Petitioners claim was that when the decree was passed, appeal were pending against both the decrees and common judgment, execution of sale deed by respondents 14 and 15 in favour of respondent 16 allegedly at the instance of respondent 17 deviating the decree was serious illegality and it amounted to ‘fraud’.

In Court’s opinion, execution of registered sale deed by respondent 14 and 15 in favour of respondent 16 by playing fraud was purely a mixed question of fact and law, such a question cannot be decided in writ petition while exercising power under Article 226 of the Constitution of India.

Supreme Court in Satya Pal Anand v. State of M.P., AIR 2016 SC 4995, held that “a party aggrieved by registration of a document is free to challenge its validity before a competent Civil Court.”

High Court held that while exercising jurisdiction under Article 226, this Court cannot annul document on the ground of ‘fraud’ and ‘misrepresentation’ since they are both mixed questions of fact and law. When the documents are presented for registration before the Sub-Registrar, his duty is to register the same subject to any bar contained in any law and satisfying the requirements under the provisions of the Stamps and Registration laws. Such registration of document is nothing but discharging public duty.

Therefore, registration of document while discharging public duty by public officer cannot be said to be fraudulent act and such act will not attract the definition of fraud under Section 17 of the Indian Contract Act.If a third party intended to annul the document, he has to file a suit to declare the suit document as illegal and not binding on the plaintiff.

Due to lack of merits, no relief was granted and petition was dismissed.