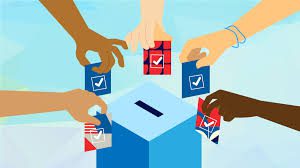 This particular decision is upheld by the High Court of Andhra Pradesh through the learned bench led by HONOURABLE MR. JUSTICE M. SATYANARAYANA MURTHY in the case of Bharatiya Janata Party v. Andhra Pradesh State Election Commission (WRIT PETITION NO.7684 OF 2021)

The instant matter was preferred by Bharatiya Janata Party (BJP) seeking for the issuance of Writ of Mandamus – declaring the Notification No.68/SEC-B1/2020 dated 15-03-2020 and the consequential Notification dated 06-05-2020 of the first respondent to the extent of recommencement of election process of Mandal Praja Parishads Territorial Constituencies (MPTCs) and Zilla Praja Parishads Territorial Constituencies (ZPTCs) in State of Andhra Pradesh from the stage where it was stopped — as illegal, Irregular, arbitrary, unconstitutional unjustified, unsustainable and contrary to the A.P. Panchayat Raj Act and Rules framed.

Petitioners were deprived of casting their vote and to contest in the elections for MPTCs and ZPTCs, a constitutional right guaranteed under the Constitution of India.Petitioners were registered voters as on the date of Notification dated 07-03-2020 as they did not attain 21 years of age.Petitioners were not eligible for their enrolment as voters, as they were below 21 years by the date of notification. In view of the Supreme Court’s decision in the matter, the State Election Commissioner was required to resume the election process from where it was paused by re-imposing 4 weeks Model Code of Conduct prior to the notified date of polling. In view of the above decision, first respondent could not have exercised power under Rule 7 of the Rules and re-notify the election process to accommodate the petitioners to contest in the elections or to vote or to elect their representative.

Further, it was added that if the request would have been accepted, holding elections would have been a difficult task for anyone, since it is an unending process, for the reason, that, many persons may attain 21 years of age and become eligible between the date of notification till date of polling, thereby, it will be impossible to hold elections to public bodies by the State Election Commission.

the right to vote and right to contest at an election to a PANCHAYAT are constitutional rights subsequent to the introduction of Part IX of the Constitution of India. Both the rights can be regulated/curtailed by the appropriate Legislature directly. Parliament can indirectly curtail only the right to contest by prescribing disqualifications for membership of the Legislature of a State.

In view of the above discussion, High Court held that though the petitioners are entitled to claim a right under the Constitution to vote and contest in the elections, but, that right must be a right accrued to petitioner 2 to 4, as on the date of election notification. They were admittedly not eligible for enrolling their names in electoral rolls, as they were below 21 years, as on the date of Notification dated 07-03-2020. Therefore, the petitioner’s ineligible by the date of notification and they are not entitled to exercise the constitutional right.

Hence, the petitioners are disentitled to claim writ of mandamus for cancellation of Notifications dated 07-03-2020 and 06-05-2020, as the petitioners did not possess any constitutional right as on that date and its infringement and invasion does not arise.