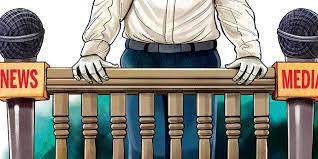 The High Court of Kerala through learned judges, Justice Devan Ramachandran & Justice Sophy Thomas in the case of Indo Asian News Channel Pvt. Ltd. v TN Suraj & Ors (WA NO. 566 OF 2022) upheld the well-accepted thumb rule that the Press shall not indulge in sensationalism or in speculating upon the guilt of any accused or other individual.

FACTS OF THE CASE: TN Suraj, the third accused in a rape case, alleged to have committed offences under Sections 116, 118, 120 B, and 506 read with Section 34 of the Indian Penal Code, was granted anticipatory bail by the court. Indo Asian News Channel made several comments on the manner in which the Court considered the bail application. The Channel continued interfering and reporting about the investigation of the case by releasing materials allegedly collected during the investigation and including those from the in-camera trial.The Channel was accused of resorting to sensationalism/publication/broadcast of fabricated allegations against the accused. TN Suraj alleged that reports circulated by the channel are damaging his reputation. The Court, while considering these arguments in T.N. Suraj vs State Of Kerala (WP(CRL.) NO. 346 OF 2022(S) ), issued an interim order prohibiting the publication/broadcast/ telecast of matters relating to the crime except the orders passed by courts of laws till the disposal of the Writ Petition, for a period of three weeks. This order was challenged by Indo Asian News Channel Pvt. Ltd in an appeal filed before the High court of Kerala contending that the order amounts to a complete ban and operates as a violation of the well-recognised principles of the freedom of the Press, to report and publish the truth

FINDINGS OF THE COURT: The Court relied on the observations of the Supreme court in the case Sahara India Real Estate Corporation Limited and Others v. Securities and Exchange Board of India and Another ((2012) 10 SCC 603) wherein the apex court unambiguously declared that orders postponing the reporting of certain phases of Criminal Trial (including the identity of the victim or the witness or the complainant) could be applied for a short duration and solely in cases of “real and substantial risk of prejudice” to the proper administration of justice or to the fairness of trial. The court remarked “ It is the well accepted thumb rule that the Press shall not indulge in sensationalism; or in speculating upon the guilt or otherwise of any accused or other individual; or to create an opinion about the comportment or character of a person involved in the trial; and not to embellish, by impelling or sponsoring an opinion they seek. Though the Press has a duty to inform the public, the publication of lurid details and other sensitive investigative inputs, which are within the sole jurisdiction of the courts to decide upon, certainly require to be put on a tight leash”

According to the Court, the direction imposed on the Channel not to publish/broadcast/ telecast ‘any item’ certainly goes beyond the reasonableness of the restrictions sanctioned by the Hon’ble Supreme Court in Sahara case (supra) and other judgements that addressed similar issues. The court disposed of the Writ Appeal, vacating the impugned order to the extent to which it has restrained the appellant from reporting ‘any item’ relating to the first respondent (TN Suraj). The court ordered the channel to abide by the parameters fixed by the Hon’ble Supreme Court in Sahara (supra) and not engage in sensationalism or pursue any line of reportage intended to forge an impression against the first respondent (TN Suraj) or any other accused or witness with respect to their involvement or otherwise in the crime.