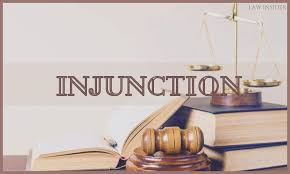 An order of injunction and an order of stay has been held to be distinct and to serve different purposes under the sections of UP Revenue Code was held by the High Court of Allahabad through the learned bench led by HOUNARABLE JUSTICE DR. YOGENDRA KUMAR SRIVASTAVA in the case of Mahendra Singh and 6 Others vs Board of Revenue UP and 8 Others (WRIT – B No. – 368 of 2022).

The instant writ petition has been filed praying for quashing of the order passed by the court of Additional Sub-Divisional Magistrate.

A further direction is sought to the private respondents not to interfere in the peaceful possession of the petitioners on land bearing Gata a situate at Bhaypur Tehsil and District Moradabad.

FACTS OF THE CASE:  The land bearing Gata situate at village Bhaypur Tehsil and District Moradabad was allotted to the predecessors-in-interest of the petitioners; however due to the mistake of revenue authorities, their names were wrongly recorded as class III tenure holders and treating them to be Asami, an exparte order was passed directing their names to be expunged from the revenue records.

Subsequently, the order was put to challenge for revision before the Additional Commissioner, resulting in the order being set aside.

The petitioners thereafter preferred a revision before the Board of Revenue which is stated to be pending during which the predecessors-in-interest of the petitioner died. Therefore, the petitioner instituted a suit for declaration u/s 144 and also moved an application seeking a temporary injunction against the respondents u/s 146 of the Revenue Code. This application was rejected by the Trial Court.

After which it was challenged before the Board of Revenue and was dismissed.

Hence, the present writ petition was filed by the aggrieved against the aforestated order.

JUDGEMENT:  Honourable Court dismissed the Writ Petition on the failing of the same. And further stated that Counsel for the petitioners at this stage seeks liberty to invoke statutory remedy of an appeal against the order rejected their application for temporary injunction.

Therefore, it is only required to be observed that dismissal of the writ petition would not preclude the petitioners from taking recourse to any appropriate legal remedy as they may be advised.