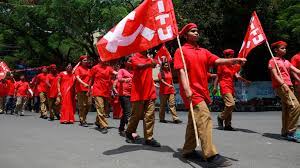 A group of trade unions seeking to hold a peaceful procession in the capital on International Labour Day, May 1, were denied permission by the Karnataka High Court on Thursday.

“This court is of considered opinion that there is a clear direction passed in order dated 3-3-2022 that the state government authorities will ensure that no protest/procession is held in the entire city of Bengaluru, except freedom park,” said a vacation bench of Honourable Justice R Devdas and Justice K S Hemalekha in the case of Suo-Motu v. The State Of Karnataka (Writ Petition no. 5781/2021).

According to the facts of the case, a group of trade unions, including the All India Trade Union Congress and others, had approached the court to challenge an endorsement issued by the jurisdictional police, denying the applicants permission to take a procession from City railway station to Freedom park and Town hall to Freedom park, while citing orders issued by the High Court, directing the state government and police authorities to ensure that Except for Freedom Park, protests/processions should not be held throughout Bengaluru.

The Unions’ counsel informed the court that May 1 is Labour Day, and members of the applicant unions plan to march peacefully from the City railway station to Freedom Park and from Town hall to Freedom Park to hold a meeting at Freedom Park.

It was also stated that, following the order dated 3-03-2022, the High Court issued orders on 13-04-2022 allowing for a takeout procession in honor of the Karaga festival. As a result, the jurisdictional police were asked to issue orders allowing the applicant/unions and their members to march in a peaceful procession and hold a meeting at Freedom Park.

Furthermore, it was stated that members of the applicant/unions will hold a peaceful procession, cooperate with the police, and ensure that the court’s orders are followed.

On the other hand, the government’s lawyer argued that the instructions in the order dated 3-03-2022 are very clear. In terms of the permission granted for the Karaga festival, he concluded that a procession held late at night on a specific day of the year cannot be compared to a procession sought to be held on Labor Day.

“As rightly submitted by the additional government advocate, the procession being taken out on Labour Day, from two sides, namely, City railway station and Town hall, to Freedom Park, would be in broad daylight and it is bound to cause hindrance to the general public,” the bench said.

“The procession sought to be carried cannot be compared to the Karaga festival,” it continued.

It added, “However, if the union members who will assemble at the railway station and town hall want to walk to the freedom park, they do not need to seek permission from this court or the police authorities. The police officials are correct in citing this court’s orders, which direct that no such procession be held on Bengaluru’s streets. As a result, applicant unions’ request to hold a procession is denied. However, in light of the express direction of this court in its March 3 order, if members of the applicant union want to assemble at freedom park and hold a meeting, that can be allowed.”

The court said orally after pronouncing the order, “We make it clear that carrying out a procession is not permitted. It has been made clear that no permission for a procession will be granted.” As a result, the applications were dismissed.